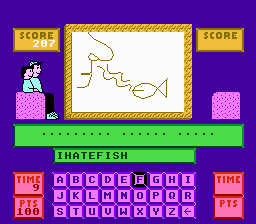 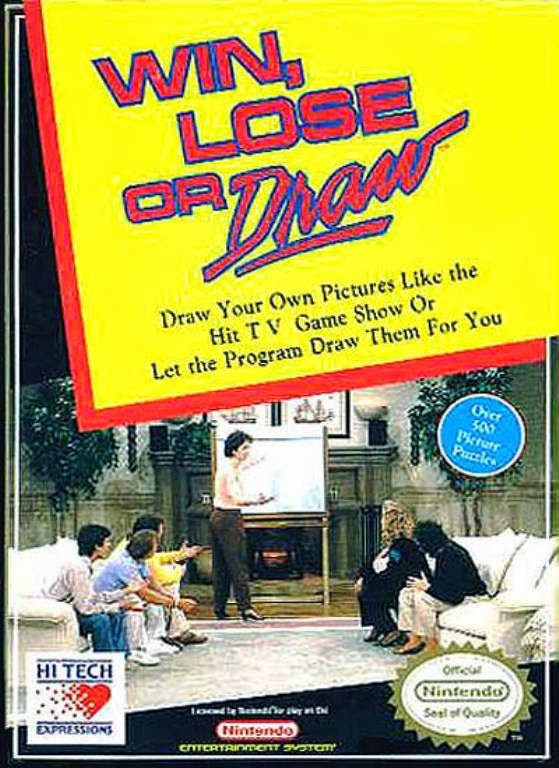 It doesn’t fit, but it’s the truth.

Win, Lose, or Draw sounds snappier than Win, Lose AND Draw, though the latter is more accurate. No matter whether you win or lose, you will always draw. Two teams – one male, one female – pit off against each other to see who can guess their teammate’s crappy drawings with speed and efficiency. Each team is given a clue (like ‘Couch Potatoes’ or ‘Silver Screen’), and the quicker they guess what the drawing is, the more points they accrue. The beginning menu allows you to set team structure (men against men, men against women, etc) and difficulty. You can also set whether the computer will automatically draw the in-game pictures, or whether you will draw them manually with the D-pad. I recommend the former. The D-pad is too stiff to draw anything worthwhile in the small amount of time the game allots you; though if you really want to try, there is a practice mode.
Win, Lose, or Draw is best played with two people or two teams of people for obvious reasons. It’s just more enjoyable to play and berate a terrible game-show game with a group. But should you be alone as I was, the horrifying reality of the game sinks in. As you can see in the screenshot above, the computer draws terribly, and the clues only sometimes line up with the drawing. One round the clue was “Potluck,” while the drawing was a man’s nose smelling a dead fish. “Smelling something fishy” was the answer, but how would one gather that from “Potluck”? Food? Yes. Mystery? No. You get a password after you beat a full game that allows you to skip the clues/drawings you’ve already been shown, but who cares? Win, Lose, or Draw is too boring and one-note to play through twice. No generous pass-codes will make me indulge in these nonsensical scrawl games again.
D-
The following two tabs change content below.