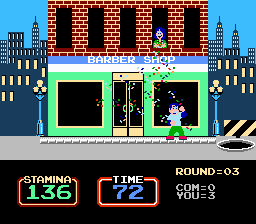 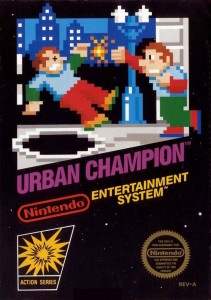 Don’t ever hand someone a firecracker next to an open sewer.

The moral of Urban Champion is, street violence should be rewarded with confetti.

Two nameless hoodlums drop everything to brawl. They stand on either side of the street, gazing with indiscernible hatred into each others eyes. They approach each other. You, the Blue-Haired Bruiser, are equipped with a light punch and a heavy punch. The light punch makes your Green-Haired foe stumble, while the heavy punch thrusts him backwards at a fantastic speed. Punch, punch, punch, until you’ve knocked him to the next screen. Continue to pulperize his face or stomach (your choice) until he rolls backwards to a screen with an open manhole. Then, with your bruised knuckles and weary lungs, sock him backwards into the sewer. Winner takes confetti and a random woman’s adulation. Loser takes poo water and an egregious hospital bill. Rinse and repeat until you, the player, are bored to tears, which probably won’t take more than a few minutes. Thus, Urban Champion.
Believe it or not, Nintendo, the purveyors of family-friendly goomba squashing, developed Urban Champion, one of the first “fighting” games ever released. Rest assured, it does not resemble anything close to contemporary fighting games; hell, Street Fighter II, released seven years after UC, feels worlds removed. No, Urban Champion exists in a singular universe, never revisited, only repackaged (it’s seen three re-releases for Nintendo’s Virtual Consoles, not counting the e-Reader version). Nintendo hasn’t returned to the “universe,” such as it is, for good reason: you can’t pick any characters, there are no special moves, and nothing happens outside the occasional pot dropping from a window. But if you really like to punch sprites, Urban Champion will hook you up. Like Balloon Fight or Wrecking Crew, the game stands as an offbeat curio from the days when Nintendo took risks with their games, not their consoles. Even if said risk resulted in a terrible game – and Urban Champion is certainly that – at least Nintendo wasn’t yet re-hashing their properties to satisfy investors’ financial expectations. Perhaps it’s good that Urban Champion would never get made now, but wouldn’t it be wonderful to see Nintendo stretch themselves again.
D
The following two tabs change content below.