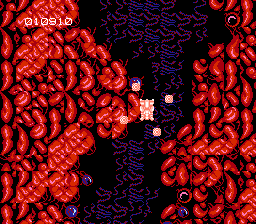 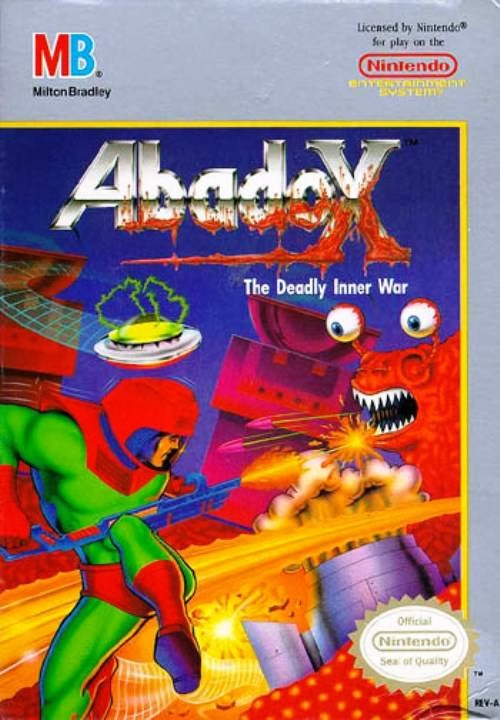 Hot steppin’ all over some guts. What a friggin’ weird cover for an even weirder game. 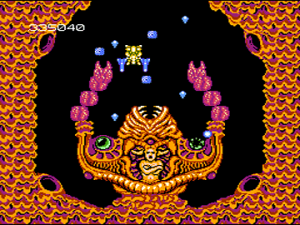 Abadox has such potential. The concept of flying into an enormous creature that feeds on worlds is  amazing. Sadly, no other shmup that I’m aware of has explored this idea (or have they? Prove me wrong! Leave a comment!). It’s a shame that Abadox has gross amounts of lag. When any shooter has lag, it should be for you to slow down, breathe, and shoot some of the swarms of enemies that are suffocating the screen. A shooter should not have lag between shots fired! If I’m tapping the B button rapidly, the amount of times my thumb hits the button should be relative to the number of shots fired on the screen.

Lag aside, Abadox is a fairly decent, if not straightforward shooter. Like any other standard horizontal shmup, the gameplay is shoot and move. Eyeballs, gaping mouths, and flying skeletons await your lasers, as you guide your hero through mile after mile of intestinal space. It’s surprising that Nintendo let Abadox slide through their, at the time, Gestapo screening process for games. Though no explicit blood spatter is shown (the title screen excepted), entrails and pulsating red intestines don’t exactly scream innocent. Like many ridiculously challenging Nintendo games, I only recommend Abadox if you have some time on your hands because you will die a lot. Judging by the levels I played through, the game is made for you to constantly add new powers to your repertoire. Unlike many shmups, when you gain different powers, you keep them all instead of simply having one. It’s definitely a nice change. Should you die, though, you lose all your upgrades and if you’re in a later level, you need those powers. “Game over” will probably be your road well-traveled. Happy (en)trails.