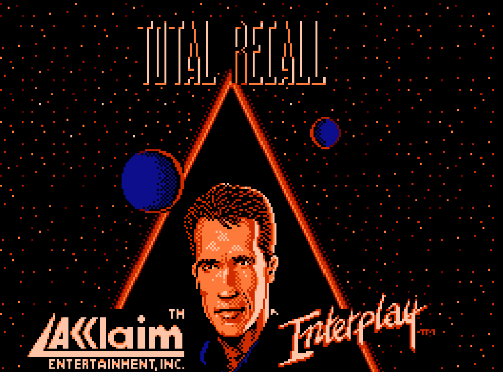 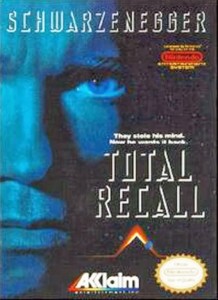 Arnold wants his mind back. Who are you to resist? 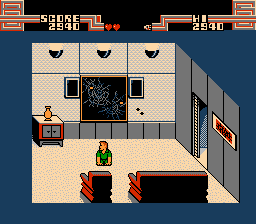 “You should not drink and bake!”

Total Recall has an infamous reputation for being one of the worst games of all time. Not just on the NES, but on any console. This is largely thanks to humor writer Seanbaby’s “20 Worst Games of All Time” article found in the 150th issue of Electronic Gaming Monthly (he ranked it at #15). The Angry Video Game Nerd has torn it apart, and on GameFAQs.com, it currently has an average review score of 1.8. None of these intrepid reviewers are wrong. Total Recall is terrible. But I would argue it’s no worse than any of the other atrocious games (licensed or otherwise) to be found on the NES.
Perhaps what irritates gamers more about Total Recall than other similarly terrible titles is how much abuse you’re asked to endure. Right from the first stage, there are a ridiculous amount of shots fired at you from varying angles. If hit by an alley midget, you’re transported from the main street to the alley, whereby you have to kill three little people before moving back to the main stage. Trashcan assassins, drive-by gangsters, the SWAT team – everybody’s out to get Arnold, and you don’t even have a gun. What you do have is a decent life bar. You can get shot up to eight times, and punched even more than that; if Total Recall wanted to be worse, there would be one-hit kills. Still, cheapness abounds. After you’ve killed your wife at the end of the first stage, one of the re-occurring bad guys starts blasting up the place with an uzi from the doorway. You can’t hurt him. In order to get by him, you’ll have to take at least two shots, maybe more depending on your luck. Other stages have similarly frustrating moments: the floating security orbs in Stage 2, the boss that won’t die in Stage 4 (it would seriously only take a couple 1990-era Arnold punches at most for any person to collapse – this guy takes at least three dozen). God help you if you get to Mars. Hit detection is shoddy, until you get the hang of enemy movements. There’s not a lot of game in Total Recall, just mindless punching, shooting, and jumping. No real skill is needed, other than avoiding the enemies’ hits, and even that boils down to luck much of the time. Nevertheless, if you’re determined enough, you can beat it. The majority of the levels are short, and the enemy attacks are pure memorization.
Total Recall is bad, but it is playable – which is more than I can say for Deadly Towers, Hudson Hawk, Beetlejuice, and so on. I’m not sure why, out of 700+ NES games, it was chosen to be the 8-bit whipping boy, but it doesn’t deserve the amount of scorn piled upon it. Should you, as Arnold’s character eloquently phrases in the film, “get your ass to Mars”? Nah, but there are worse fates.
D
The following two tabs change content below.