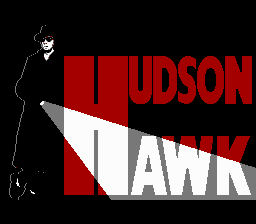 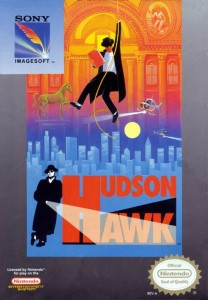 This is a far cry from “The Return of Bruno.” 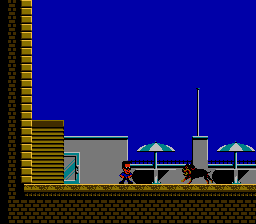 That dog will throw you off a building. No joke.

“Hudson Hawk” eh? According to many movie buffs, this is either one of Bruce Willis’ best or worst films. Considering the man’s made a truck load of movies, that’s saying a lot either way. Not having seen the film, I, of course, withhold any judgment. Having played Hudson Hawk for my NES, however, I feel inclined to judge swiftly, painfully, and without mercy. Hudson Hawk shall be banished from my gaming library, never to be played again, unless the need should arise to jeer at it with friends and loved ones.
I hope you all like broken hands attempting to pick up some dog crap because that’s exactly what this game’s graphics and mechanics represent. Bruce Willis is a fairly attractive guy, but Ocean didn’t even try to recreate his likeness. Instead, we get a thin midget with a huge chin, overwhelming sunglasses, and a penchant for throwing baseballs. Seriously, baseballs are your weapon, unless you want to punch someone squaw in the harbles. Hudson Hawk’s jumping ability is almost non-existent. He can barely get three inches off the ground, and methinks it was designed like this to give the game some difficulty. If you were able to jump like any other competent video game character, you could easily jump over enemies, barriers, gaping holes – anything, really. Because you can’t, the latter becomes unbearable. Hudson Hawk (or as I ended up calling him Hudson “Rock Hudson” Hawk) is one of the most unwieldy and ugly characters I’ve played as in a long time, and as a result, the game itself is close to unplayable.
There are worse movie-to-game translations, to be sure, but that doesn’t mean Hudson Hawk needs to be given a passing glance. The NES is already weighed down by far too many abominable movie games. Lord knows the games don’t need to be encouraged by people actually playing them.
F
The following two tabs change content below.