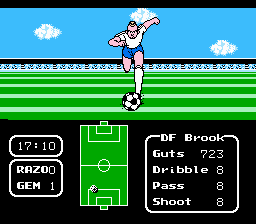 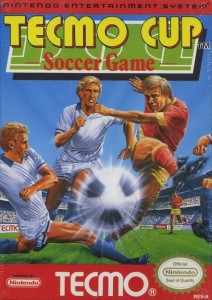 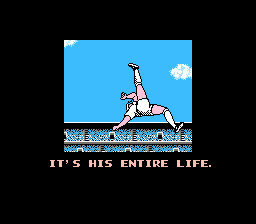 Tecmo Cup Soccer Game isn’t so much a soccer game as it is a series of cinematic soccer-related vignettes. Rather than controlling your entire team from a 3/4 overhead view, you’re only given one character at a time to run with, and your actions are all decided via a series of in-game menus. Let’s say you have control of Brook. Brook’s movement is blocked by the opposing team (this will happen all the time). A menu pops up. Will you… a) pass the ball to a different player? Or b) shoot the ball and let God sort it out? If you’re close to the goal, of course you will “b,” but more often than not, you will “a.” If you decide to pass, another menu pops up showing the entire field and the locations of the players you can pass to. Once you pick one, the ball will travel across the other field, like it’s the most exciting sports-tastic moment you’ve ever witnessed. The other team may try to cut the ball or mark the passing player, but if it lands at the feet of your teammate, he will take the ball and run with it until he is blocked. Then the cycle continues anew, until (hopefully) you score a goal. Sunrise, sunset. 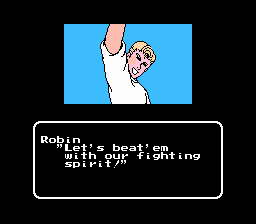 Oh, don’t worry Robin. We will.
Offense is great, but once you play defense, Tecmo Cup‘s lack of player control begins to grate. If a player of the opposing team is racing towards your goalie, hope that the game itself allows you to block them. No amount of button-mashing can make them stop running. You are completely at the game’s mercy. If Tecmo Cup does allow you to block the opposing team, you have three options: cut (prevents a pass), tack (tackle the opposing player), or mark (blocks the player from progressing, leaving him open for a cut or tack). Success in any of these options potentially puts the ball back in your team’s hands, unless the other side intercepts. Once the opposing team reaches your goal and kicks the ball, your goalie has two options: punch (punch the ball away) or catch (the ol’ catch and toss). Much like the other options you’re given throughout each game, neither choice seems to make much of a difference. The choice is either successful or not, making the entire soccer game feel like a crapshoot.

Brook brings it home. His guts are off the charts!
Despite the choices given, despite the ability to level up your stats, a part of me wishes Tecmo Cup would give you complete control over the game. That way, if you failed at blocking a goal, if you failed at passing, it would be your own fault and you wouldn’t feel like you were at the mercy of the computer. Then again, I admire Tecmo Cup‘s unique role-playing approach to soccer – especially because I think I would suck at a regular soccer game. Besides, the cinematics, menus, and over-the-top Japanese presentation really liven up the otherwise uninteresting game (to me) of soccer. In spite of its flaws, its limitations, Tecmo Cup is a soccer game I’ll return to, and I’m as surprised by that as anyone.
B
The following two tabs change content below.