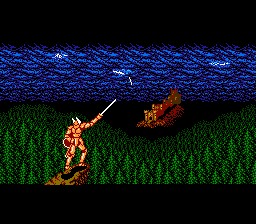 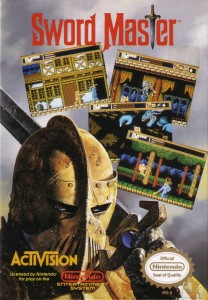 The Sword Master does look pretty cool on the cover. And the screenshots don’t look cheesy in the background. Well done, Activision. 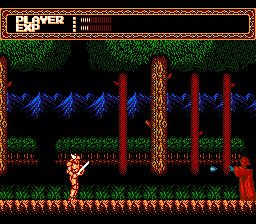 Sword Master: “Woah woah woah, nobody ever said anything about magic!”

Sword Master is a sequel to the awkwardly titled, Castle of Dragon, which, as I noted in my review, is less a game of its own than a lovechild between Castlevania and Altered Beast. Sword Master is that same lovechild in his early twenties: you can see the resemblance of the parents, but there’s a greater sense of self coursing through the gameplay. The production values are higher, the combat is solid, and it definitely feels like its own game. That being said, Sword Master is still a very average platformer that neither impresses nor repulses. It’s more engaging than the infantile Castle of Dragon, but lacks the cachet of either of its birth parents.
As said master of swords, you walk from one side of the screen to the other, swinging your sword and raising your shield. One-hit enemies come at you in waves, while mini-bosses appear every few screens. The mini-bosses require a bit more than a button-mash, but they’re still pattern memorization; watch their attacks and you’ll be fine. You have an EXP meter that increases by one every time you kill an enemy. Fill it up and your life bar increases. As you progress through the game’s seven levels, you’ll acquire four different types of magic: fireballs, bombs, bullets, and flashes. The magic is good for bosses, both mini and regular, but don’t waste it flagrantly on the weaker guys. We’re all adults here, right? I don’t need to tell you how to employ limited magic in a video game.
Besides the occasional dodgy hit detection, Sword Master isn’t a horrible game, but it lacks depth. Even the addition of magic doesn’t add much to the game’s repetitive swing-and-block nature. Despite each level’s distinct backgrounds and music, they all bear a “have I been here before?” feel. On the other hand, sometimes hack-and-slash is all one needs, depending on their state of mind. Don’t expect greatness. Just… expect. Sword responsibly.
C
The following two tabs change content below.