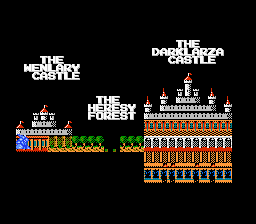 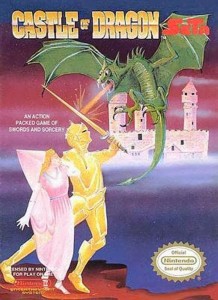 The appropriate response to this cover is to pick it apart. Why does the princess look like a man? Why is the castle drawn so poorly? Why does the dragon look terrified to be alive? 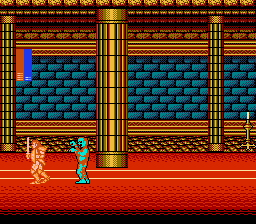 I think it best to run.

Spoiler alert: this game’s getting an “F.” What’s with my negative attitude towards games as of late, you ask? The real question is, what’s with games that suck getting in the way of good games? If I could, I would prance down the road, stopping to smell and caress the chrysanthemums, before continuing to prance along my merry way. Every game would get an “A” because life is so wonderful, how could anything be bad? Unfortunately, we live in trying times, and in trying times, it gets harder and harder to put smiles on our faces. Perhaps at a different time, in a different place, Castle of Dragon would have gotten a “D.” Perhaps, on a good day, I could overlook the game’s raging flaws and say, “Well, Castle of Dragon, God bless it, is trying its best.” After playing through crap after crap after crap, I’m ready for a break. Castle of Dragon spits on my break. I spit on Castle of Dragon.

If Altered Beast and Castlevania had a mutated lovechild, I’d like to think Castle of Dragon would be its name. The backgrounds, the characters, the enemies all remind me of Castlevania, but the overblown sprites (which, admittedly, look pretty good for an NES game) and the clunky swordplay seem stolen directly from that arcade/Genesis “classic.” As with ninety-five percent of all NES games, it’s a side-scroller and you play a big sword-swinging beefcake whose trying to rescue the princess. Wield your sword against bats, skeletons, zombies, and any number of Universal monsters that don’t seem to respond to the cold edge of a blade. It’s simple gameplay, in theory, but things get difficult when you try to use your shield. Your shield bounces the enemies back, but this means you can’t swing at them right away. You then have a choice: take an obscene amount of damage while trying to hack your enemy to bits, or block their attacks and watch them bounce around all day. There are power-ups you can get for both your weapon and your armor. If you acquire the blue suit of armor, you have twice as much life, but since the enemies get more difficult as you progress, you can’t really survive without it. You can get flame projectiles, among others, for your sword, but after you use them a few times, they’re completely depleted. Oh, and you only have one life and no continues.

In Japan, this game is called Dragon Unit. While it’s still a stupid name, why would Seta re-title it Castle of Dragon for the United States? For once, Japan was able to put two English words together better than native English speakers. At this point, I’m just complaining to complain, but there really is no reason this game couldn’t have been titled Dragon Castle. The title would have looked nicer, probably resulting in more sales and I wouldn’t have had to play it until I got to the “D”s. Everybody wins!