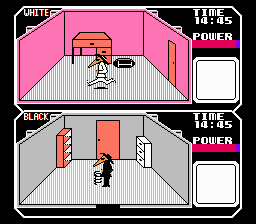 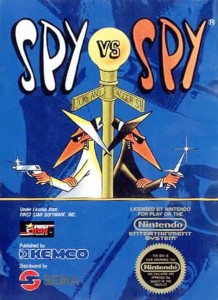 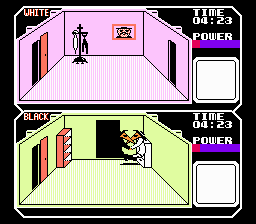 Punching each other is one of the game’s strengths.

Based on the iconic Mad Magazine comic strip, Spy Vs. Spy pits two spies in white and black ensembles against each other. Each of the eight levels requires you to find five items: a suitcase (needed to hold the other four items), a key, a passport, a sack of money, and a plane ticket. These items are found by searching through every piece of furniture in a series of connected rooms. Watch out, though, as some of this furniture will be booby-trapped by the opposing spy (the white spy is controlled by the first player, while the black spy is controlled by the computer or a second player). The screen is divided into two sections, one for the white spy and one for the black spy; thus, you’re always able to see what the other is doing. You can set up your own booby traps to stop the other player, or try and avoid the other player and search for the items.
Watching the spies get blown up or electrocuted is amusing at first, but after you’ve seen all the death animations, you’re left with the search and find gameplay – which is lackluster, at best. Find any two items at the same time? If you don’t have the suitcase, it doesn’t matter as you can only hold one item at a time without it. The early levels are small and it’s easy to find items, but any level past the third has large, confusing layouts that can get one lost, despite the presence of a map. Items can also be moved by the opposing spy. This makes for some rich, hearty swears if you’re back-tracking to pick up items you’ve seen but couldn’t carry, thanks to lack of suitcase. “Spy Vs. Spy” might be a classic comic, but the game fails to replicate the series’ unique subversive appeal. Random hilarious deaths only take you so far.
D
The following two tabs change content below.