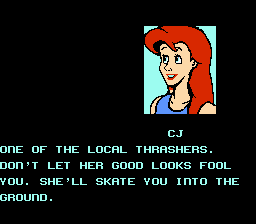 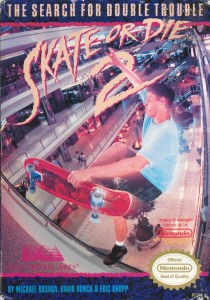 Bro gets his kicks in a mall. Radical! 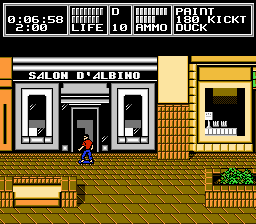 If only skateboards were still allowed in malls today.

You think you know fear? Try taking down the mayor’s wife with a paint gun without thrashing and burning. Pulling off a fast trick like that – one of several in Skate or Die 2 – will elevate you from “scrub” to “shot caller” in 4.2 seconds or less! Yes, Skate or Die 2 eliminates the first game’s skateboarding events for skateboard-related platforming and over-the-top voice acting (the theme song is a work of horrible genius). No more Downhill Race or Freestyle on a half-ramp (though there is a separate ‘Ramp’ option on the title screen) within the game proper. Here, you’ll be collecting fast food, tapes, and CDs to trade for new boards and skateboarding tricks. You’ll be delivering items back and forth between different locales in the mall. You’ll be finding the plans for a new ramp on the boardwalk. Why would you want to do any of this in a skateboarding game instead of actually skating? Because the skating-heavy original game wasn’t that hot. Problem is, neither is the sequel, and the blame mostly lies, once again, in the controls.

Once Disney finds out where Ariel has been, she is so grounded.
The control scheme, in theory, should work well, but the execution is lacking. To skate, you tap left or right on the D-pad to give you momentum. If you want to turn and go the opposite direction, however, you can’t just tap left or right and flip around instantly. You brake first by pressing the D-pad in the opposite direction, then turn around and start skating. This becomes an issue in almost every level because braking is never as quick as you want it to be. If you’re trying to find Rodney, the shopkeeper, and he skates by you, there’s no way you’ll be able to turn around in time to catch up with him. Pressing ‘A’ is jump, like any good NES game, but ‘B’ is a hot mess. On the menu screen, you can program three different functions into the letter ‘B,’ such as, your weapons or various skate tricks. In order to use these things, you can’t just hit ‘B.’ Depending on what slot you have assigned your weaponry or tricks, you have to hit Up, Right or Down on the D-pad plus ‘B’ in order to use them. It’s overly cumbersome, and in the last couple levels especially, hinders your progress. 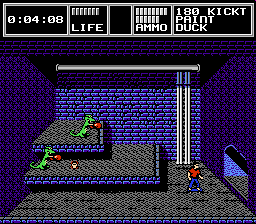 If I was in the sewers and I saw these boxing crocodiles, I’d be on my way.
Had the Skate or Die series attempted to combine platforming with an equal emphasis on skating, and completely revamped the controls, it would have been a pioneer for future series like Tony Hawk. If anyone remembers the Skate or Die series now, it’s less for the games themselves, and more for the over-the-top 90s extremism. SKATE. OR. DIE. SKATE OR DIE. DIE DIE DIE DIE DIE!
C-
The following two tabs change content below.