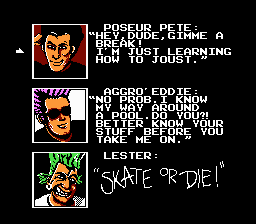 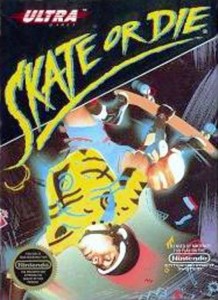 She said, “See you later boy.” 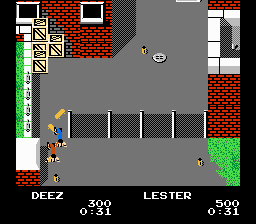 A couple amateur skaters, eager for Monster endorsements, got a date with Mother Road Rash instead.

Skateboarding games didn’t become a popular genre until the Tony Hawk series on the Playstation, and with “thrashers” like Skate or Die, it’s easy to understand why. NES controllers, God bless ’em, just weren’t meant for games that required you to do much more than jump or shoot.
In Skate or Die, the controls in each of the five events range from fair to impossible. During the Freestyle competition, you propel yourself with ‘A’ and do tricks with the ‘D’ pad. It’s not hard to be a shot-calling baller with a simple control scheme like that. Don’t be surprised when all the other kids (presumably with their pumped-up kicks) are jealous of your sick moves. In the downhill events, though, they’ll be laughing at you as you fall flat on your face time and again. In both Downhill Race and the Jam event, you can pick two different control schemes, Regular Foot and Goofy Foot, neither of which are worth a considerable damn (in Regular Foot, push ‘Down’ to move down; in Goofy or ‘Inverted’ Foot, push ‘Up’ to move down). Ponder this: the ‘D’ Pad propels you forward, the ‘A’ button plus the ‘D’-pad turns your direction, but the ‘A’ button by itself also helps you jump and duck. Got all that? All you’re trying to do is control a skater boy downhill! God help you if you land on any grass or texture that doesn’t resemble pure gray asphalt, or your Green Day-loving skating wunderkind will be pulp.
Skate or Die reeled kids in with its edgy name before disappointing them with poor controls and limited events. Technically, you can have up to eight people alternating controllers during competition, which is neat. Multiplayer aside, if you wrestle with Skate or Die‘s controls and win, what you’re left with is a lean skateboarding game with little replay value. With skateboarding games this pathetic, one can understand why punk devolved into emo.
C-
The following two tabs change content below.