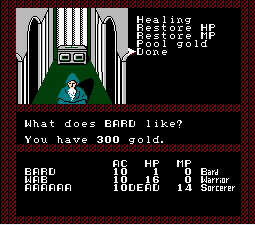 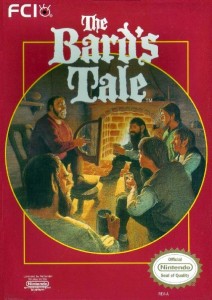 “So I was just walking down the road, right? And this guy threw a Bard’s Tale cartridge at me!” 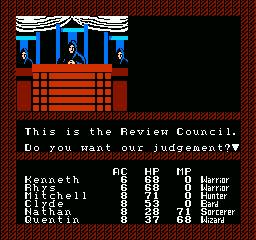 I sentence you to cast this game into oblivion.

The Bard’s Tale is one in a long line of computer adventure games that was inexplicably ported to the NES a few years too late. In the mid-80’s and early 90’s, RPG’s were advancing at a fairly quick pace. The general meat-and-bones was the same – grind, grind, grind – but the advances came in other ways, like better graphics, more interesting stories, and perhaps most importantly, well-made menus that didn’t take years to navigate.

The story is your typical “band of misfits goes against an evil ruler” with one exception: your absolutely fabulous bard. Because the bard’s singing often raises your attack or strength during battles, they are arguably the most important member of your party. It’s a nice change from the warrior taking all of the pixelated glory, but it’s the only real innovation in the game. The rest is sloooooow going, as all of the mid-’80s fantasy RPG tropes are nestled firmly within the game’s CPU bosom. You want to buy weapons for your party in a quick and timely fashion? Think again! You want to fight enemies that aren’t insanely harder than you? Not possible! Methinks the Bard should have kept this slow-paced tale on the computer. It’s a literal slog.