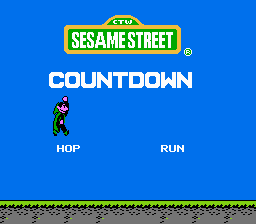 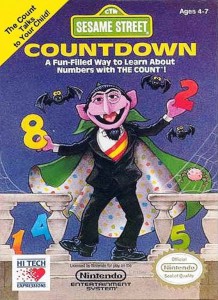 The Count bends down and whispers in your child’s ear. Also, no seven-year-old would want to play this game. 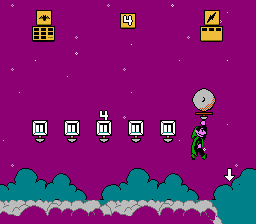 Countdown might look complex, but it is anything but.

Sesame Street: Countdown stars yours and my favorite number-loving vampire, the Count. Thus it’s reasonable to assume that there would be a supernatural amount of counting within Countdown. Perhaps some addition, subtraction – whatever integers the night decides to bring us. But for an edutainment game titled Countdown starring the Count, there’s a questionable lack of math or anything educational. 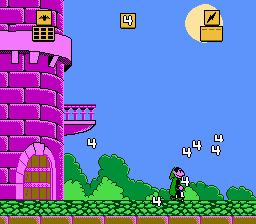 There were no survivors.
Countdown gives you two options on the main screen, Hop or Run. Both are sinfully easy, though choosing Hop basically allows the game to play for you; more on that later. You’re then presented a ferris wheel composed of the numbers 1-10. As the wheel spins, select a number. Whatever number you pick is the number you’re supposed to look for in the following level (I use the term “level” literally – there’s only one level in the entire game). Within the level – which I believe is just a Sesame Street walkway – there will be an assortment of numbers floating above your head. Find the numbers you selected from the Ferris Wheel and jump to hit them. Do this as many times as possible (the Count cackles gleefully every time), until the level ends. If you select Hop, the Count will hop to the next letter he sees every time you press right on the directional pad. All your poor, lazy eyes need to do is watch out for the number you selected and jump to collect it. Select Run and you’ll have the arduous task of walking the Count to each number. There’s two bonus stages that you can reach by grabbing onto a floating question-mark balloon in the level, but there’s no point to them. Both bonus areas involve collecting the same number you’re looking for in the main level.

What’s it gonna be?
Very little time, thought, or effort went into the making of Countdown. The other Sesame Street games were failures as well, but they at least resembled educational games for toddlers. Countdown doesn’t even try. It’s a game that could be beaten in less than ten minutes by a three-year-old. No amount of Count cackles could make that right.
F
The following two tabs change content below.