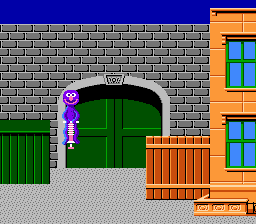 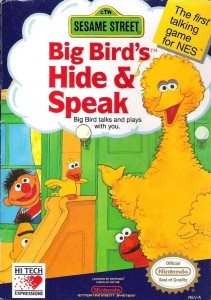 Big Bird talks and plays at you, rather. 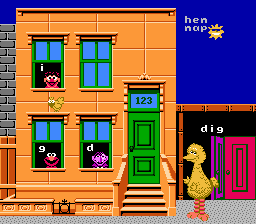 “The waning sun will put an end to your spelling fun”… that’ll be five dollars.

Put your thinking caps on for this preschool throwback. It’s time to memorize like it’s 1989. In Big Bird’s Hide and Speak, Sesame Street stalwarts Bert, Ernie, Elmo, the Count, and Grover will hide in an apartment building (not sure if it’s the Sesame Street building – it’s been too long) and it’s your job to find them. There are six similar modes of play that progress from easiest (really easy) to hardest (still really easy). Each mode contains the same layout: an apartment building with four windows, and Big Bird, as your too-verbal guide and host, off to the right hand side. Each mode also has the Sesame Street characters occupying the four windows in the building, though they won’t always be in the same position. Modes 1 and 2 involve memorizing both the names of the Sesame Street characters and their positions in the building with the shades down. Big Bird repeats the names methodically, ensuring that his voice bores down into the center of your being; it’s both entrancing and mind-numbing. Modes 3 and 4 are about identifying the correct letters next to the characters (where is the letter ‘m’? Next to Bert, of course!), and modes 5 and 6 force you to spell out three-letter words; in the case of mode 6, before the sun goes down. Much like Sesame Street: ABC, there is little learning to be had here. Spelling out words like “cat” and “nap” are about as highbrow as Hide and Speak gets. At least if you beat any of the challenges you can watch an animated Grover bounce on a pogo stick. That’s, uh… that’s somethin’.
F