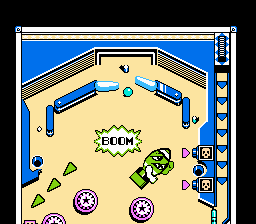 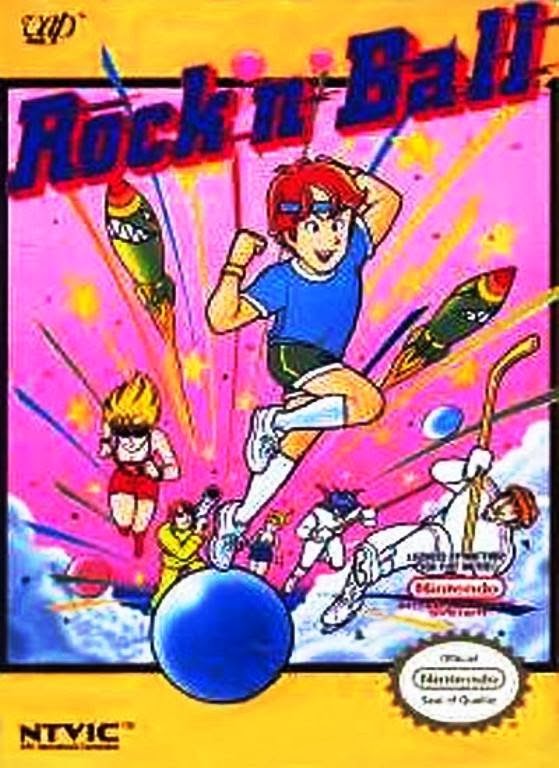 What a gang of spunky adolescents. Excelsior!

Playing upside down in the Battle Mode. Boom.

Rock ‘N Ball is one of several maddeningly obscure titles in the NES library; very few people have heard of it (apparently all of GameFAQs, – where are the reviews?!) including myself, until today. Can one blame Rock ‘N Ball for bouncing into anonymity? It has a generic name that signifies little about the game’s purpose. Not even a glance at the cover helps. Who are these vigorous young go-getters? Professional bowlers? Wait, no, there appears to be a hockey player on there. And smiling nuclear bombs. Overwhelming optimism seems to be the main theme, in fact. How ’bout that wacky Rock ‘N Ball folks! Check out the back of the box, however, and you’ll see that Rock ‘N Ball is a pinball game with a surprising amount of tables and gameplay. Don’t let those bomb’s smiles fool you: Rock ‘N Ball takes pinball very, very seriously.
Seven different tables, six unreasonably ugly characters to choose from, four unique modes of gameplay, four-player multiplayer, one overwhelming pinball cartridge. Mode #1 is traditional pinball with up to four players alternating turns. Nothing fancy here, just a two-tiered table that demands satisfaction. There’s bumpers, a loop, bonus runways, shmeh.
Mode #2 is called 9Ball, but what the developers meant to name it was “Pachinko.” The table here is littered with little pegs that will bounce your ball around every which way, and holes that look conveniently pinball-sized. Before you even start, you’ll notice little numbers appearing and disappearing underneath the holes. Stop them by pressing ‘A’ and try and get your balls to go in the holes in a ‘Bingo’ pattern (the game calls it that, not me), either up, down, or diagonally. 9Ball takes some getting used to. The pinball is floatier then normal, and the pegs really affect where the ball goes. It’s a crapshoot, but if you like Pachinko, it’s not bad.
Mode #3 is called Battle Flipper, a surreal battle mode where you play against the computer or another person. There are three tables to choose from here. Each table contains a top and bottom half, complete with flippers. The bottom of the table will usually be controlled by Player 1 when the ball is at play there, while Player 2/the comp will control the top of the table when the ball floats upward. However, if your ball goes down the drain on your side of the table, you lose a point (best 2 of 3) and, in the next round, you’ll have to play pinball from the top of the screen; in other words, upside down. The ball’s gravity shifts every time it crosses the middle of the table. It’s disorienting at first, but winning can be accomplished with a little grit and determination; play with your head upside down for maximum win and blood rush.
Mode #4 is Sports Pinball. There’s an ice hockey table and a soccer table. Imagine foozball, but with no players except the goalies. Each side has one flipper where the players would typically be. The flipper is both for offense and defense, but like foozball, there’s very little time to make level-headed decisions. Just hit the ball with the flipper, and hopefully, in the right direction. Ta-dah!
Rock ‘N Ball is a generous cartridge, and one of the best pinball titles on the NES. The tables it gives to the players aren’t the most in-depth or flashy, but they’re solid enough to come back to, especially if you have friends who enjoy video pinball. Disregard its worthless name (and the fact that Namco excised the special ‘Pac-Man’ table from the Famicom version – doh!) and, hot dog, you have a wiener.
B-
The following two tabs change content below.