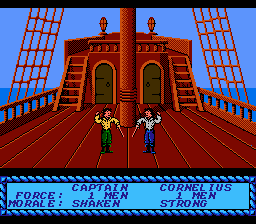 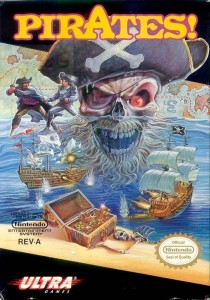 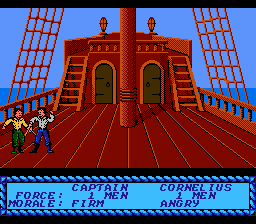 I am so angry!

The NES continues to surprise with this smashing port of the 1987 Commodore 64 game, Sid Meier’s Pirates!. Typically, computer ports on the NES are astoundingly bad or slow; just look at any AD&D game to see what I’m referring to. But Pirates! satisfies because of its varied gameplay.
You start off as a fledgling sea captain of either British, Dutch, French, or Spanish descent. Your nationality determines what town you start in, and from there, you start to work your way up the social ladder by fraternizing with governors. If you help the governors by taking out their enemies’ ships or lands, you’ll win special titles and land and the chance to woo some women or “sea wenches.” This scenario is where Pirates! starts, but you don’t have to follow this path. You want to be a pirate for your entire life, destroying ships and towns and never settling down? Go nuts! There’s eight different types of ships to acquire, from the dinkiest rowboat to an enormous War Galleon. The more men you have with you, the less plunder you share between them all, so consider well how many men you want at your service. The map for Pirates! is downright enormous and it will take dozens of hours for you to explore every nook and cranny. You can search for treasure, find long-lost members of your family, explore uncharted areas. There’s an absolute wealth of things to do.
Unlike Koei strategy games that plop a thousand options into your lap, Pirates! eases you into its tumultuous European landscape – talk to the governor, visit the tavern – before allowing you to roam where you may. Pirates! was a trendsetter for today’s modern open-world games and I’m thankful that this NES port maintains the original’s swashbuckling feel.
A-
The following two tabs change content below.