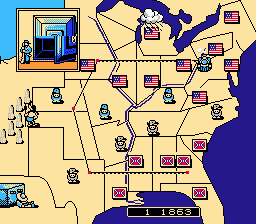 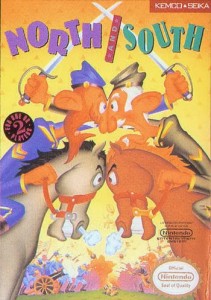 I expect Bugs Bunny to come out at any time. 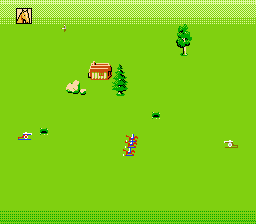 Ride on, you buck-wild stallions!

Allow me to share an excerpt from the North and South manual: “With North and South, you now have the opportunity to relive the historic Civil War. Every effort has been made to simulate the strategic circumstances actually faced by the Union and Confederacy. This is your chance to rewrite the history books!” Yes, you can play as both the Union and the Confederacy in this game. I’m all for playing a strategy game based on the Civil War, but does anyone really want to “rewrite the history books” besides Ku Klux Klan members and other unapologetic racists? I’m probably caring too much about that one sentence, but I was truly shocked to read it (and with an exclamation point at the end of the sentence, even!). North and South is still an enjoyable beginner strategy game, but more consideration should have been given to the game’s premise.
Alternate historical ramifications aside, North and South manages to entertain by stripping down strategic warfare to the barest elements. From the menu screen, you decide whether you play as North or South, level of difficulty, if strategic elements like weather, European reinforcements, or Native Americans/Hispanics sabotage either your army or the opposing army, and what year to play. Each year from 1861-1864 is accounted for with historical background (1865 is not available to play, since the South had all but lost by that point). Once you begin the scenario, you advance onto unclaimed and enemy territories. If a territory hasn’t been claimed yet, all you have to do is move one of your men onto it. If you move onto the opposing armies territory, war occurs. Each side has the same number of units, typically: one cannon firer, three horseback riders, and six ground shooters. Control between the three units can be awkward at first. Press the ‘B’ button to switch between units, then press ‘A’ to begin controlling them. The horsemen are your most valuable commodity, as they can easily slaughter cannon firers, ground shooters, and other horsemen, if controlled properly. Whoever destroys all of the soldiers on the opposing side first wins and secedes their territory. As you conquer more territories, you’ll begin to notice trains and forts. Trains supply taxes from each of your territories. The more gold bags you have, the more units will be given to you (five gold bags per unit). Infiltrating a fort turns the game from a strategy into a side-scroller. If you avoid/kill attacking dogs, soldiers and dynamite, and collect the fort’s flag, you win the territory. Defeat all soldiers to end the scenario and go back to the main menu.

This here’s a map. What a time to be alive.
North and South‘s strategy-lite is an excellent alternative to those of us who aren’t loyal Koei devotees. I’m particularly thankful that, unlike Nobunaga’s Ambition, Genghis Khan, or any other Koei clusterfluff, I understood everything North and South presented to me. Better yet, each of the scenarios can be conquered within fifteen-to-thirty minutes on the easiest setting; perfect for a quick pick-up-and-play session. North and South‘s potential re-writing of history doesn’t impress me, but its sense of focus and clarity is certainly welcome.
B
The following two tabs change content below.