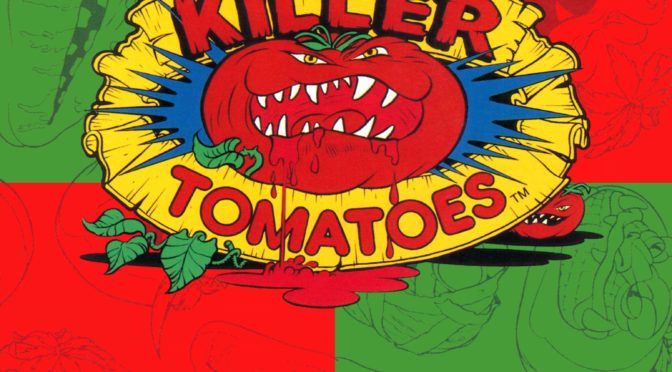 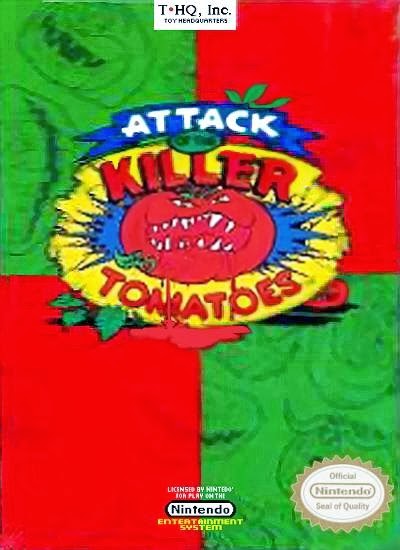 Tomatoes come in both red and green varieties. Those with teeth are not recommended for consumption by the FDA. 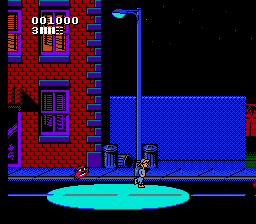 Grumpy Tomato turns his attention towards the girl playing hopscotch.

Attack of the Killer Tomatoes is based on the cartoon from the early 90s, which is in turn based on the cult movie from the ’70s. I saw snippets of the cartoon when I was younger, but I haven’t seen the movie or its sequels so I’m not exactly sure how true this game is to its source material. The Killer Tomatoes have camp value for days, and inserting said camp should have been priority number one in this game. Throw in so many ridiculous movie/cartoon references, and weird happenings that no one will know what is going on, but no one will care because it’s just so zany! Instead of camp, the best this game could offer was  an endless sewer to trudge through because, you know, THAT’S WHERE TOMATOES COME FROM!

You play as a young child and you’re fed up with all these angry tomatoes bwoping around you city. Strangely, the child can barely walk across the screen (rickets?), but he can leap like a common-day Mario. His inhuman jumping ability seems incredible, until you realize you can’t aim properly with your jumps; landing on the tomatoes with 100% accuracy is beyond this child’s grasp. This wouldn’t be so bad, except the jump is your only attack through the game. Frankly, it’s the easiest thing in the world to make a decent jump and Super Mario Bros proved this: jump on a Goomba’s head, squish, dead. A Goomba is essentially a brown tomato, anyway, and although the killer tomatoes move a touch differently than goombas – jerkier, consumed as they are by their lust for blood – that’s no excuse for the kid to not hit them properly. At the very least, have the kid be able to pick up a bat or something.

In the twenty minutes I devoted to Killer Tomatoes (all I could stomach), there didn’t seem to be a point to the game, other than half-heartedly jumping on tomatoes and collecting sack lunches. There’s no map system, no real objectives, no actual fun: just miles of tomatoes and an extravagant amount of sack lunches. Someone’s mother must have been up all night making those things.