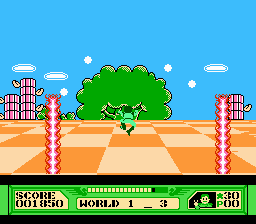 EVERYBODY WANTS TO RUN THE WORLD 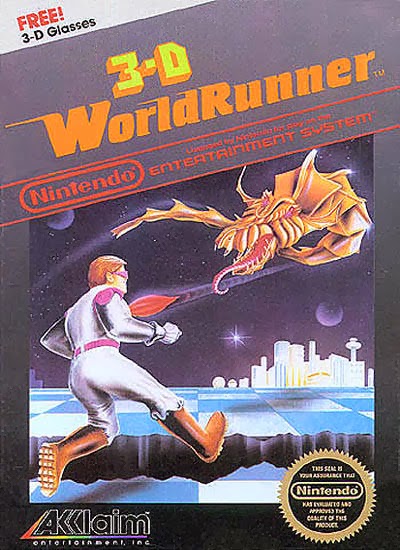 “3-D Glasses sold separately” would have been the ultimate troll on consumers. The Eighties were a slightly gentler time. 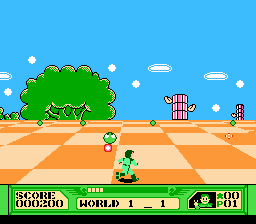 World Runner was famished and the mushrooms lingered in front of him. He did what any decent game character would do and popped them in his mouth. The rest is history.

You know who Square Enix is right? That’s right, the company who trademarked androgynous mopey teenagers! Remember when they were just Squaresoft? Mario RPG, Secret of Mana, among so many others… great memories. Before they were ever Squaresoft, though, they were simply Square, a tiny three-man operation in an obaa-chan’s basement. Amidst the sixty-hour work weeks and three pack-a-day insanity, there was one game that catapulted them into instant success, fame, and yes, after-hour coke parties: 3D World Runner*.

Arguably one of the most influential games of all time, 3D World Runner singlehandedly destroyed anything the gaming world knew about video games. In a time when only games with real gameplay were praised – Castlevania, Super Mario Bros., Hogan’s Alley, etc. – Square broke the mold. “What we need is a gimmick,” Hironobu Sakaguchi (the game’s developer) may or may not have said. “Something so earth shattering, so mind-blowing… so… not 2-D, that everyone will bow down and kiss our feet.” As every gamer worth his salt now knows, that something was 3D. 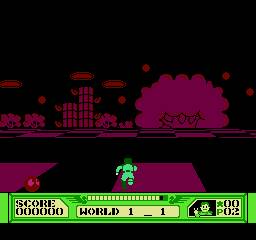 I believe it’s appropriate to say that, at this point, you are officially “tripping balls.”

In the game, you play a runner, equipped only with your trusty space suit and a whole lot of determination. You’re running through constantly-scrolling “three-dimensional” worlds, collecting stars for points, while trying to avoid fiery cacti, bottomless pits, and drugged out bouncing balls. You run… run… RUN harder and faster through these worlds, than any other World Runner before you. And why? Because of your 3D glasses that make you feel like you’re in ANOTHER WORLD. At the end of each world, you take on a boss that resembles a centipede and blow it up into chunky 3-D meaty bits. Wash, rinse, and repeat through seven more similarly-themed worlds, and you have the making of a classic.

As everyone knows, 3-D caught on in just about everything, including television, movie theatres, and even real life! Without the courageous exploits of our young World-Runner, these 3-D efforts to make our heads explode while simultaneously trying to entertain, wouldn’t have come to pass.