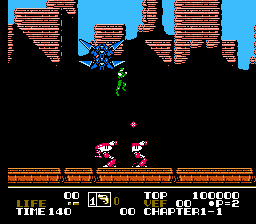 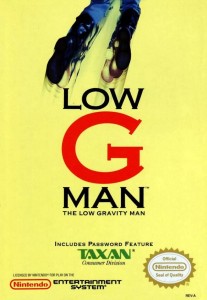 This might be one of the best NES covers of all time.

Low G Man makes no apologies for his lack of G.

The protagonist of Taxan’s Low G Man is neither a baller nor a shot caller, and I’m willing to bet that he doesn’t have twenty-inch blades on his Impala. His lack of gravity should make/give him all of these things, but alas, having a really high jump does not make Low G’s half-hearted side-scrolling action game worthwhile. As a post-apocalyptic warrior fighting scores of machines, one would think Low G would have something more than a freeze gun and a spear attachment, but those are his only killing implements at the start of the game. You will need to freeze an enemy, then spear up or down in order to kill them, and it’s as annoying as it sounds. The first level is insanely hard. I can get to the end boss, but between Low G’s floatiness, the boss’ projectiles, and awful weaponry (just try to stab the tank boss’ mechanical arm with your spear while it moves back and forth across the screen. JUST TRY IT!), it’s nigh impossible. I password-ed ahead to an ice level. It wasn’t nearly as hard, but it was bland. I jumped my way through most of the level without issue before I was taken out by High G assassin robots and chunks of falling ice. There are other weapons you acquire throughout your low-gravity travels, like boomerangs and bombs, but these are few and far between and one must conserve them for boss battles. You also can commandeer certain enemy vehicles, which is fun at first, until you realize these vehicles have a certain weapon spray pattern. If the enemies don’t come near the spray, they’ll just attack you until the vehicle explodes. In conclusion, Taxan should have tightened Low G’s floaty controls and given the dude an actual gun. Low G Man would still be hard, but instead of dying repeatedly in frustrating bloody pools, victory would feel more achievable, less cheap. Victory would incite us to put our hands in the air, because we would be true players.
D+
The following two tabs change content below.