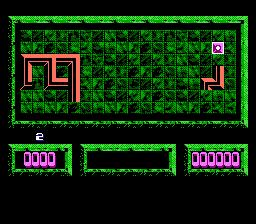 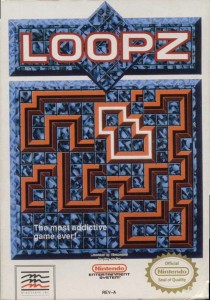 The boldest statement ever printed on a game box?

Somewhere in the world, someone finds this screenshot more enticing than a scantily-clad beautiful woman.

When you wake up in the morning, you don’t have a bowl of Fruit “Loopz”, do ya? Do ya?! I suppose one could cross out the ‘S’ on the cereal box and replace it with a ‘Z,’ if one were so inclined, but that sounds like a lot of work. You’re better off just picking up a controller and playing Loopz and building loopz and dreaming of loopz until your brain is so loop-sided, you can’t go to work or take a bath or play with your kids without thinking of ooze-like constructions slithering this way and that, but always, always connecting at the end because order must come from chaos!
Loopz is a puzzle game where you connect several uniquely shaped pieces into a loop. Sometimes, if you’re lucky, you can create a nice, visually satisfying square-loop, but given the randomness of the pieces the game gives you, many of your loops will appear like snakes. Some of your loops will go unfinished because the game will give you a piece and it can’t go anywhere. That’s ok. Set down each piece within the time limit, make lots of loops, the game is happy and you may continue. Three game variants await you. Game A requires you to pick which level you want to start at a la Tetris or Dr. Mario. You’re then transported to a neon green playfield and some downright terrifying background music. Make as many loops as you are able, or feel it necessary to make because the game won’t end until you’re out of lives. Unlike Tetris, you won’t move up a level by completing a certain amount of loops unless you’re playing Game B. Game B is almost the same as Game A, in that all you really do is make loops. However, after every 10 loops, you go up a level, and with every loop you make without losing a life, you get a point added to your bonus multiplier. The bonus multiplier is used for the bonus games, but because my loop-making abilities were rather limited, I never reached them. Game C is a type of memory game. The computer shows you a loop made with a limited amount of pieces, then gives you the pieces in order to re-construct that exact loop.
There was something mildly haunting about the way one can get hooked into making loops of all shapes and sizes, but unless you’re a dedicated fan of puzzle games, playing Hatris late into the night unapologetically, there’s no reason to let Loopz wrap itself around your brain for more than half-an-hour. It’s a passing fancy, a mild distraction.
C+
The following two tabs change content below.