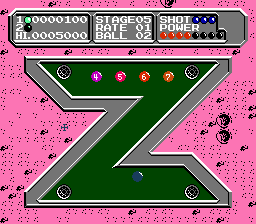 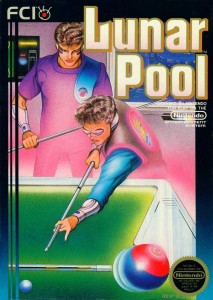 “So her name was Rio, and she danced in the sand! Can you believe that?!”

Don’t be fooled by those two normal-looking Reaganites playing pool in a normal-looking, good ol’ American dive bar on the cover. I’m pretty sure Lunar Pool‘s sixty stages take place on the moon. Why not? I, for one, embrace this progress. If the United States isn’t going to try to land people on different planets anymore, we may as well exploit the one giant space rock that we “actually landed on.” Besides, if all billiard simulations controlled as well as Lunar Pool, why limit them to Earth? Expanding billiard tournaments and productions on the moon will lend a new sense of gravitas to the entire sport, or your billions of tax dollars back.* 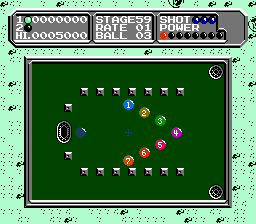 Even harder than it looks.

So what do Lunar Pool‘s moon-based innovations bring to the table, you ask? Well, you can control the friction on the tables before the game even begins. If you want to weigh the balls down with so much needless gravity and make everyone hate you, turn up the friction. If you realize that you don’t need to waste gravity’s and everyone else’s time because you’re on the moon, turn down the friction so the balls can glide and slide across the table. Or if you want to play a boring game of Earth Pool, keep the friction on the standard setting. Many of the stage backgrounds have moon-based settings, always a plus when you’re trying to impress that special someone. That’s pretty much it. You can play by yourself, against a computer (not recommended), or with a friend (highly recommended). Despite the lack of game options, it might be the best game of pool on the NES and it’s even better when played on the moon.
B
*tax dollars will not actually be returned
The following two tabs change content below.