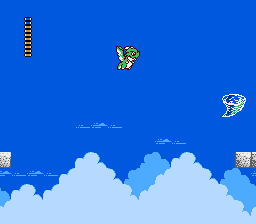 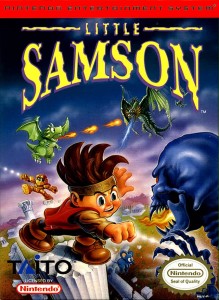 While this cover’s not a complete tragedy, Taito could have invested more of the game’s charm into the art. 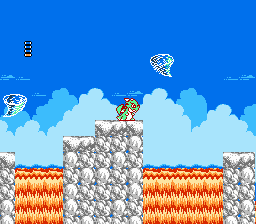 Little Samson is a treasure, both literally and figuratively. It’s worth the price of a new console, according to Price Charting. Yes, if you want to play Little Samson on your NES the way Taito and God intended, you’re gonna be shelling out upwards of a thousand dollars. It’s almost worth it. It ranks up there with Castlevania III and Mega Man II as one of the system’s greatest platformers, and yet, the game’s praises go unsung due to its relative anonymity. Sure, Little Samson was more than likely shunned upon its release in 1992, thanks to its nonsensical name, horrible cover, and increasing 16-bit market share, but those reasons no longer apply two decades later. In other words, unless you hate fun, you have no excuse not to play this stupendous, clever, and challenging game. 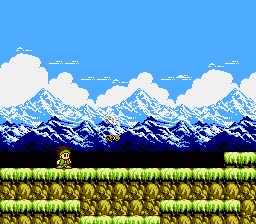 The beginning of your journey.
Little Samson immediately thrusts you into the role of its four characters. There’s the human, Little Samson, who can climb walls, jump really high and throw a plethora of rocks at enemies. He’s the most well-rounded of the four. The dragon, Kikira, can fly for brief periods of time (similar to Princess Peach from Super Mario Bros. 2, but better). She also blows fire which ascends in a J-shaped arc. She’s not as strong as Samson, but her flying abilities make her invaluable for levels with large gaps and constantly floating bosses. Gamm the Golem is bulky and strong. His suit of armor makes him heartier than the other members, but also slower. Still, a lot of bosses can go down quick thanks to his rocket punch attack. Finally, there’s K.O. The mouse. He drops what appear to be explosive rat turds at enemies. The turds pack a surprising punch, but he himself has the smallest lifebar of any character in the game. He can traverse up and down walls and even on the ceiling. His small size also allows him to sneak into secret areas. The game gives you an intro stage for each character to get used to their mechanics, then you’re off to the main game where you can switch between characters whenever you want. 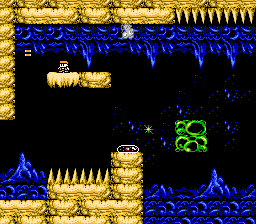 Stackin’ rat turds like I stack my paper!
Each character’s unique abilities, and how the level/boss design force you to use said abilities seamlessly, really make Little Samson special, but they’re not the only reason you should play this game. Multiple branching paths making for great replay value, bright and colorful graphics, a whopping seventeen levels, transcendent music (each character has their own theme music) – for crying out loud, even the pacing is terrific. No level ever feels too long. Above all else, Little Samson is truly a joy to play. I can’t remember the last time I had such a blast playing an NES game, and that is a compliment of the highest order.
A+
The following two tabs change content below.