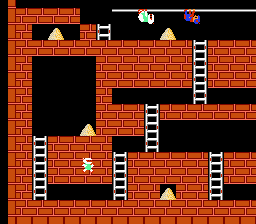 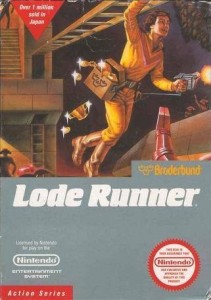 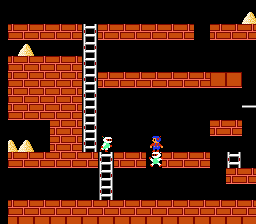 Lode Runner is about getting the gold. It’s about staying on top. It’s a tale of power, money, and backstabbing in a land composed of bricks, holes, ladders, and Bombermen. You, the Runner, were once a Bomberman, bombing twisted, misshapen creatures thirsting for Bomber blood. But, after fifty tiring stages of smoke, rubble, and guts, you were awarded a transformation. You were set free from your life of destruction. In return, you became the villain. Your new Runner persona makes you crave gold, and only your former Bomber friends – robbed of their bombing ability – can stop you from obtaining it all. If they touch you, you die, but you have an ace up your sleeve: the ability to disintegrate brick. If the Bombers get near you, you can zap any brick and they’ll fall in. If they fail to get out before the brick re-generates, they’ll be temporarily displaced. Tragic? Hardly. The Bombers always re-emerge at the top of the level, ready to inconvenience your looting. The levels get harder, meaner. This isn’t mindless bombing. If you want to stack gold bars to the ceiling of your new thirty-thousand square-foot mansion, you’ll have to trap and bury your former friends time and time again. You’ll have to zap through piles of bricks to get those tricky gold pieces. You’ll have to sweat bullets. Stay sharp. Don’t stop for a minute. Don’t trap yourself. Don’t have a conscience.
B+
The following two tabs change content below.