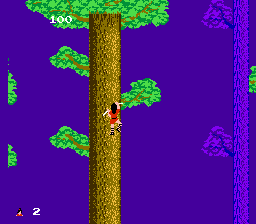 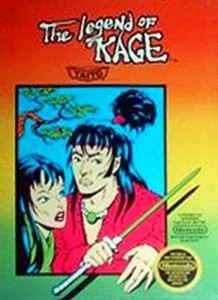 The Japanese Barbers Guild take their hair-cutting methods TO THE EXTREME!

Climb that tree, pledge! Higher! ‘Til the wheels fall off!

I love the freewheeling spirit present in The Legend of Kage, but am still not sure whether such mindless ecstasy deserves to be praised or judged harshly. As a shuriken-throwing, forest-jumping ninja warrior determined to get back his beloved, you bound across treetops, castle walls and moats, destroying a milli other generic ninjas. Imagine Kung Fu, except not every level looks the same and you can jump fifty feet high into the air. It’s really quite thrilling to hack endless waves of enemies to bits as you run through the forest, but beware, for the ominous one-hit kill lurks behind every stray shuriken. The Legend of Kage is such mindless fun while it’s happening, that it’s a shame the game’s over so quickly. If you’re quick – and it’s hard not to be – you can beat the game in ten minutes. At least in Kung Fu, the sheer simplicity of the game dictated the game’s shortness. But with this spiritual successor, I felt that, perhaps there should have been more to do than just hack, slash, and avoid enemy projectiles. It’s cool to be able to climb trees and jump super high, while throwing out shurikens in four different directions, but if those features don’t add anything to the game besides just being cool effects, why give players the option? Despite the initial thrills and the piles of ninja corpses left in my warrior’s wake, I wanted more.
C+
The following two tabs change content below.