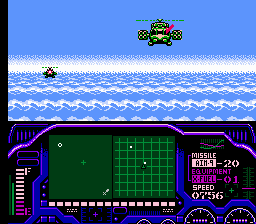 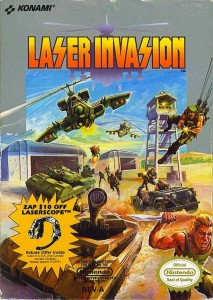 With all this firepower aimed at your face, you’re gonna need at least ten shots of whiskey before you even think about playing.

The Danger Zone is nigh.

There’s a whole lot of crushed dreams going on in Laser Invasion. Perhaps the first Konami game I’ve ever played that didn’t inspire mushy feelings and love notes (Konami is indeed one of the greatest game developers of all time), Laser Invasion is an arcade-y mess that tries too hard to be action-packed, when it contains all the excitement of a blocked colon. Flying a helicopter and blowing up other helicopters should be fun, not frustrating, but it’s hard to progress when one missile sends your whirlybird crashing down onto third-world nations. It’s easier and better to just avoid the helicopters and save your missiles for the end boss, but there’s little enjoyment to be had from just driving a helicopter (take that, SimCopter!). There are two other types of stages, the gun-shooting stages where you use a Zapper to take out enemies that pop up on the screen, and a maze section where you collect items and weaponry to use in other helicopter and gun-shooting stages. I unfortunately never made it past the helicopter stage, despite trying numerous times, so I can’t comment on the other sections, but they frankly look and sound generic and boring. I understand Konami wanted to introduce the LaserScope, their voice-activated headset, in conjunction with Laser Invasion, but you don’t really need it to play. In fact, based on videos I’ve seen of the LaserScope in use, it’s just easier to play the game with the standard controls and the Zapper. Thankfully, Konami never sought to make Laser Invasion 2: ‘Copter Boogaloo and went back to focusing on games that gave a damn about fun. For this, I salute them.
D+
The following two tabs change content below.