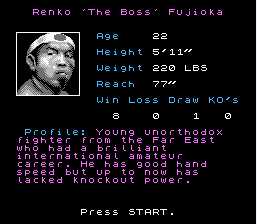 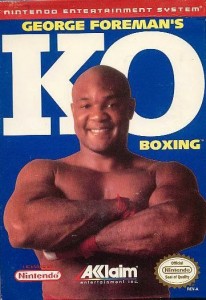 Sure, Foreman’s all smiles, until Eddy “The Pirate” Preston knocks his teeth out. 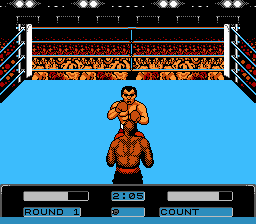 So George… how ’bout that Punch-Out game, huh? Pretty neat.

I never expected a boxing game to be so depressing, but playing as George Foreman in George Foreman’s KO Boxing really makes one stop and ponder their own mortality. When you first press Start, a screen comes up that gives George Foreman’s stats and information. At the time of this game, he was 43 and making his boxing comeback. This in and of itself is a potential cause for celebration. “Foreman Ready to Beat People Half His Age Senseless!” read the headlines. But therein lies the sadness. He’s trying to beat people half his age and twice as spry. Lorenzo “Bullet” Luciano is the first opponent you face and he’s a doozy. His super-punches (press Select to perform your own, though they’re not nearly as powerful as the computer’s) can knock down two-thirds of your life, and should one connect, you’ll be down on the ground soon. You can struggle back up to the ring by hitting A + B together really fast and regain most of your life, but you can only do this three times within the span of a bout. Despite the decent mechanics, this game is too hard for its own good. If the first opponent can knock down a huge chunk of Foreman’s health with one well-placed blow, then something’s wrong. K.O. Boxing is reminiscent of Punch-Out, sans the cartoony charm and gradual increase in difficulty. Once you get knocked out, a screen appears that shows an incredibly well-rendered picture of George Foreman sitting on the side of the ring, head bowed, defeated. One can only imagine the inner turmoil the man is going through. Just do him a favor: turn off the game and go buy one of his grills. Burgers are much tastier than defeat.
C-
The following two tabs change content below.