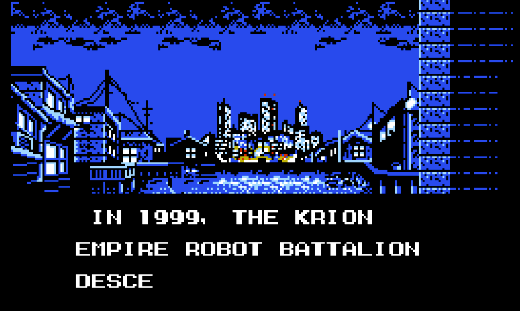 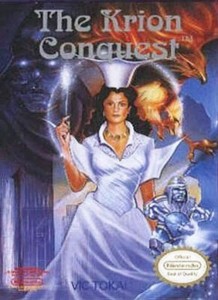 Glenda the Good Witch and the Tin Man strike out on their own. 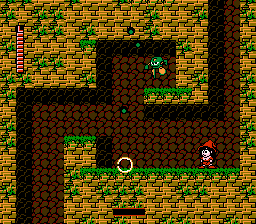 I feel as though I’ve seen this game before, perhaps six different times…

First of all, let me express how terribly disappointed I am that this game is not called Krion Konquest. “Conquest” is practically begging to begin with a “K,” I tell you! Begging! Anywho, it’s taken until the ‘K’s but here we are with our first full-blown, unapologetically blatant Mega Man clone. Oh sure, you’re a witch instead of a Rockman, and you begin with a set amount of powers instead of earning them as you go. But from the witch sprite that is very obviously a morphed Mega Man, to the shoot-and-ask-questions-later game mechanics, to the annoying timing of the enemies, to the powers that you have (instead of using Rush as a step or a jet, you have… a broom), to the obnoxious difficulty, to the pseudo action-packed music… well, I could go on.
I don’t have a problem with games that are rip-offs. I have a problem with games that are poorly-made rip-offs, and The Krion Conquest is very much made by people who don’t understand the essence of Mega Man. Instead of controlling a charming, lovable, and lethal robot who inherits the powers of the enemies he destroys, you control a generic witch who already has all the powers she’ll need. There is no sense of achievement, knowing that your character is as powerful in the first level as they’ll be at the end of the game. A sense of “why-bother?” permeates the entire game, especially since the enemies are brutal and health is scarce. Sad, because The Krion Conquest could have been an enjoyable Mega Man-esque adventure, had it stuck a little more religiously to the source it “borrows” from. Instead, it’s soulless, an abandoned shell of a far superior game. Capcom deserves better homages.
D+
The following two tabs change content below.