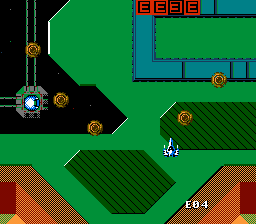 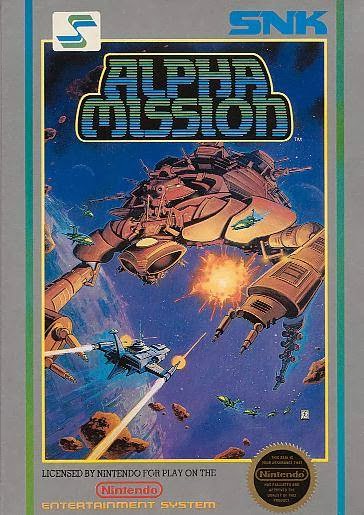 SNK – before the Neo-Geo and $200 cartridges

The word “alpha” can be used to refer to something as the first in order of importance; the “alpha” male as an example. Well, in a “group” of early NES shooters – many of which are certified arcade classics, like Galaga – Alpha Mission asserts itself with its name, boldly proclaiming that it contains the priority mission over those other chump shooters. In reality, Alpha Mission is that kid who thinks he’s tough, but gets beaten up by the school bullies when he tries to join their gang: a sad sight.

You are Syd, the renegade ship with everything to prove and nothing to lose. When you’re not spouting off cliche’s at your commanding officer or girlfriend, you’re destroying foes on the front lines. Spinning circles, flying hairbrushes, homing missiles – your world is a dangerous place. You use the ‘A’ button to fire haphazardly into the night and the ‘B’ button to destroy the obstacles on the “ground”; Xevious anyone? By destroying obstacles, you gain power-ups, like speed, advanced weaponry, and other shmup-ly goodies. Sounds like any common gutter shmup, and indeed, Alpha Mission is slow, hard, and the enemies don’t have distinct patterns. Power-ups help, but the difficulty is borderline unbearable. After six treacherous levels, the game repeats itself, and the cycle begins anew. Old arcade conversions on the NES are typically a mixed bag, but Alpha Mission is just a flaming bag. Don’t put it out, if you know what’s good for you. 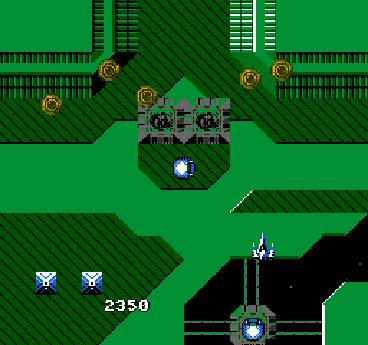 Go home and be a family man, Syd. There’s nothing for you here.