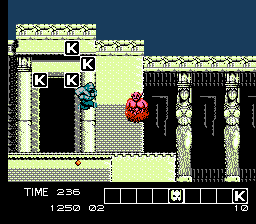 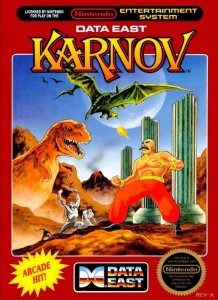 Karnov smashes through every single era of time with his Iron Fists! 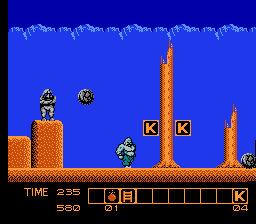 When Karnov aches, he turns blue. No amount of ‘K’s will cure him.

Karnov is a soulless, heartless brute of a game, the kind that begs kids to subject themselves to the masochistic tortures lurking within its depths. Should you give in to Karnov‘s unrepentant siren song, you will be rewarded with addicting gameplay. Does this addiction make the game good? Absolutely not, and aye, there’s the rub. Do you sacrifice your happiness and joy in order to do what very few have done and actually conquer Karnov‘s nine levels or do you acknowledge that the game is insanely hard, insanely flawed, and truthfully not that much fun?
Karnov is a fire-breather in search of the treasure of Babylon (what fire breather doesn’t want to roll around in Babylonian gold?). Along the way to obtaining said treasure, all manner of weird creatures from mythical lore attack him. Despite Karnov’s considerable girth and charming mustache, it only takes two hits to kill him and this is where the game gets tough. It’s almost impossible to dodge certain enemies’ attacks, especially the evil faces on the wall in the second level. Early on, you can upgrade your weapon from just a simple fireball, to a three-pronged fireball attack and this certainly helps in the killing of ridiculous enemies. However, once you die, you lose the rights to use the upgrade, and in my relatively short time with the game, I never saw the upgrade again. It wouldn’t have mattered if I did, anyway, as I kept dying. But I also kept playing. Such is the conundrum of Karnov.
There are other items that help in your advancement of the game. Collect fifty ‘K’ symbols to get an extra life. Bombs will help blow through bricks. Ladders will help you reach unreachable areas. For my money, these items are scattered too sparsely throughout the level to be of much help, but what do you expect when you’re trying to get Babylon’s gold? Money doesn’t come for free. If there’s any lesson Karnov has to pass down to the children, let it be that one.
C
The following two tabs change content below.