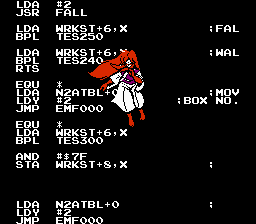 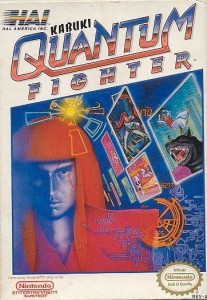 Until I find the righteous one… Computer Blue. 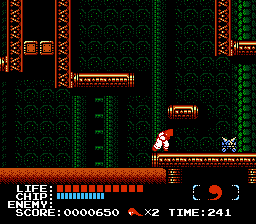 I bet most men wish their hair was that strong and springy.

Kabuki Quantum Fighter may be one of the most over-the-top Japanese games I’ve heretofore had the good graces to review, and that is a compliment of the highest order. To transform a strait-laced colonel into a full-on Kabuki Warrior in order to save the world from rampant computer programming is truly inspired madness. As so often happens with these ludicrous premises, KQF happens to be quite the fantastic romp. Get your action platformer on through six-levels of dark, surprisingly gruesome computer nightmares. No robotic shark or roly-poly bug is safe from the attack of your flaming red hair, the likes of which Willow Smith would be jealous of. The graphics are sinister and fantastic, and the animation of Kabuki is more fluid and graceful than I’d expect from the NES. While the energetic music keeps the blood pumping, the controls are what elevate this above the typical platformer tripe. Kabuki’s movements are precise and spot-on, which is even more impressive considering some of the jumps you’re forced to make in the game. I’m not sure if I would change anything about this game. While not quite a masterpiece, Kabuki Quantum Fighter presents a unique spin on a genre that was, even in 1990, already becoming tiresome. Plus it’s called Kabuki Quantum Fighter.
A-
The following two tabs change content below.