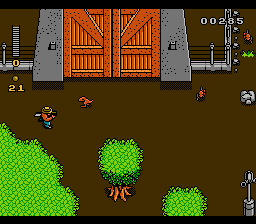 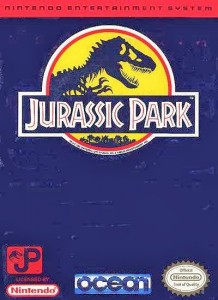 This might be one of my favorite logos of all time, no foolsies. 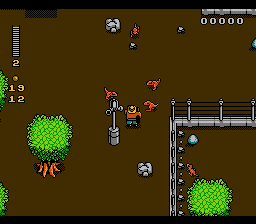 “Welcome… to Jurassic Park.” Talk about four words that can shape a young boy’s childhood. “Jurassic Park” came out almost twenty years ago and those lines, uttered by Sir Richard Attenborough, along with John Williams’ stirring music and the brontosauri in the fields can still move me to tears. The film is one of the best action/suspense blockbusters of the 90s, which is why, when I played the Genesis and SNES versions lo back in 1993, I was woefully disappointed. The Genesis incarnation captured more of the suspenseful movie feel, but the sludgy controls were a pain, while the SNES version played like a prolonged fetch quest. And now, as of today, I can say I’ve played the NES version and I’m still vexed that four words uttered by a kindly elderly gentleman can prove to have more weight than an entire game.
Nearly twenty years removed, Jurassic Park is not as bad as John Hammond attempting to play God and create large swaths of dinosaurs, but it is as mediocre as the stunted “Jurassic Park” sequel, “The Lost World.” Like the SNES version, this version was created by Ocean. This means you’re still fetching eggs, simply on an 8-bit scale. In order to progress, each area has a certain amount of dinosaur eggs that you need to either destroy or collect. My recommendation is to collect. You’ll need all the ammo you can get, especially when the velociraptors start coming out in packs to feed on your tender vittles. Once you’ve collected the proper amount of eggs, you’re given a keycard, which will then open up another area nearby. Go into that area – usually a building – collect more eggs, get another keycard, repeat until you’re in the final area. To this game’s credit, the “boss battles” are fairly unique. In the first stage, for example, you rescue the little boy Tim from stampeding triceratops’. You don’t kill any of them, however. You just move out of their way as they come careening down the screen towards you. Other sections just have you completing the stages, but doing so is reward in and of itself. The later stages are utterly massive for a NES game, and that’s when collecting eggs for a living starts to get tedious. Assorted grievances: when enemies burst forth from the shrubbery, they almost always hit you, which can take off up to a quarter of your life; also, every enemy re-spawns when you leave a room, including the tough-to-kill dilophasauri and velociraptors. This game would be challenging enough without that. It boils down to this: if Spielberg’s so into video games, why aren’t video games based on his work as breathtaking as the original source? Because life isn’t fair.
C
The following two tabs change content below.