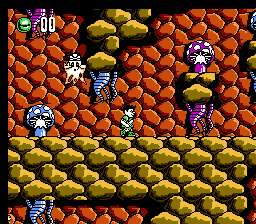 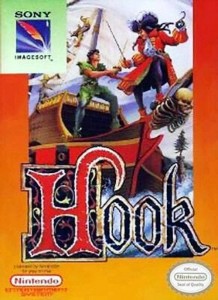 You think you can just get accepted into the Lollipop Guild? Survive a night in a ghost mine with floating pirate badges and we’ll talk

Three awful movie-licensed titles in a row? If I believed in karma, I might wonder who I’ve wronged for the universe to cast these three unspeakable evils upon me. Hook is up there with Home Alone 1 + 2 in the “abomination” genre of NES games. There is nothing redeeming about it. From the drab, pastel graphics, to the awful muzak, the clunky controls, and the busted-platformer gameplay, Hook is the epitome of a worthless game.
Now I’ve never seen the film “Hook,” and there’s a reason for that: I don’t like Peter Pan. I don’t like the concept of a man-child flying around in tights and playing make-believe with actual children at all hours of the night, and neither should anyone else. Even as a kid, this odd story failed to resonate with me, and indeed, made me uneasy. Thankfully, Hook alters the traditional story. In the game, you play as Peter Pan, but you’re supposed to rescue your children from Captain Hook. Much nicer. For pretty much every level, though, you’ll be “rescuing” peaches and acorns and coins, just so the level will end. That’s right: in order to progress to the next level, you have to collect worthless everyday objects. The game never says why, but I’m assuming so you can bribe Captain Hook into letting your children go. “But look, Smee, I have at least a dozen peaches here! Trade for Wendy?” There’s a surprising amount of levels in which to collect said grocery items in exchange for your children, so if you actually want to beat the game, you’re in it for the long haul. At least Home Alone 2 was honest: four levels, you’re done, THQ’s got your money, you’ve got a fistful of tears. Hook leaves one feeling empty and alone.
One last reason to not play Hook: you have a dagger, but it does no damage to enemies. The game wouldn’t pose a challenge at all if you could use your weapon, but because you’re forced to jump over and around enemies, you’ll be dying quite a bit. Truthfully, I’ve always wondered if Peter Pan could die. Hook answers that question with a resounding, “Yes, thank God.”
F
The following two tabs change content below.