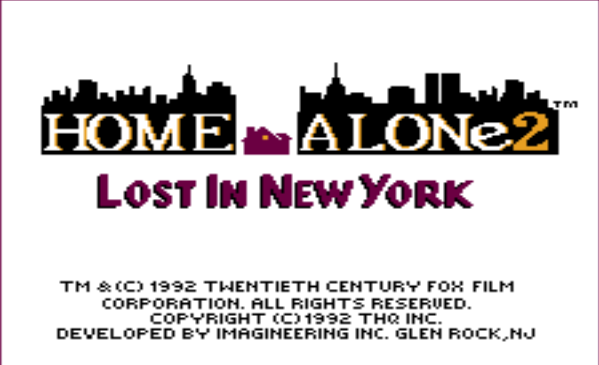 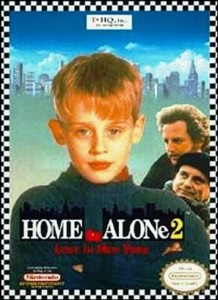 I wonder if Joe Pesci was annoyed that he couldn’t say the F word every five seconds in these movies. 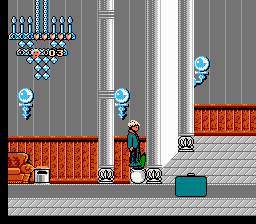 To escape the briefcase of doom, Kevin must stand for three minutes on a plant.  Further instructions to follow.

Nobody does retro gaming reviews for the money. It’s for the love of the game, the nostalgia that comes with re-visiting old favorites and discovering new gems for the first time. That being said, THQ should drop a full sack of money on my doorstop for having to trudge through Home Alone 1 and 2. Thankfully, Home Alone 2 isn’t as soul-suckingly empty as the first game, but it takes on a crapulence all its own throughout its four levels.
Home Alone 2 has more of an LJN feel than anything else. Enemies and environments are recycled everywhere, graphics and music look and sound like an afterthought, you’re given no clue as to what to do, and if you keep playing long enough, you will fall into a trance-like state, mesmerized by the game’s overwhelming badness. I hate to admit it, but long after I knew I should have stopped, I continued to play this game. Was it the ridiculousness of seeing a vaccum cleaner trying to suck Kevin into itself or suitcases hurtling themselves at him? Old ladies doing butt-launches? Maids throwing towels? I didn’t get farther than the hotel, but knowing that I had three other maddening levels waiting for me didn’t inspire me to push any further. Once you break free of the trance the game sets on you, your immediate instinct is to never play it again, for fear of falling into the same trap again, and perhaps – dear God! – going further into the game? Beating it? The possibilities are horrible.
F
The following two tabs change content below.