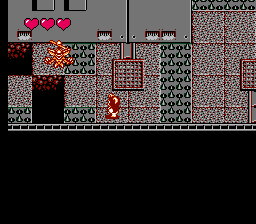 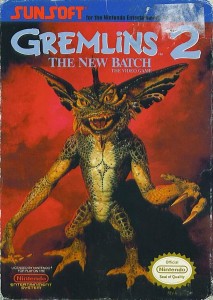 I miss the Gremlins, but I really don’t want them to make a comeback. 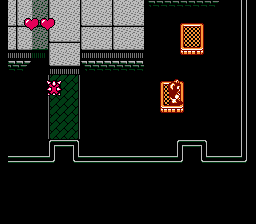 If I’m not mistaken, Gizmo is about ready to plummet down a ventilation shaft. Bust out your balloon, Gizmo! To safety!

I really hated this game as a kid, but I’m not sure what I was expecting. Granted, “Gremlins 2” was one of my favorite childhood movies, so my incredibly high expectations couldn’t be met. Or I was just really bad at the game. Yeah, probably the latter. Sunsoft has crafted a straightforward, but challenging overhead platformer where you play as Gizmo and work to stop the Gremlins from taking over the city. Gizmo may be a cute little dickens, but he’s also lethal. You start off hucking tomatoes, but you can get weapons upgrades like flaming arrows that allow you to take out the new batch and beyond. You only get one life and three hearts to start, but if you search around, you can find that kindly, creepy Chinese guy and buy additional hearts and lives from him. You do get continues and there is a password system, so despite the difficulty, the game is playable and beatable. It also, more or less, follows the plot of the movie, albeit in a shortened version. Cinematic cutscenes really make you empathize with Gizmo, if only because of his heartbreaking sad faces he gives the camera. Special props go to Sunsoft for the top-notch eight-way controls. Shooting may not be as smooth with the D-pad as with other eight-way directional games like Contra, but I still managed to hit my targets more often than not. Here’s one licensed game for the NES that doesn’t reek of horse manure. That still doesn’t mean you should play it after midnight, though. That’s asking for it.
B+
The following two tabs change content below.