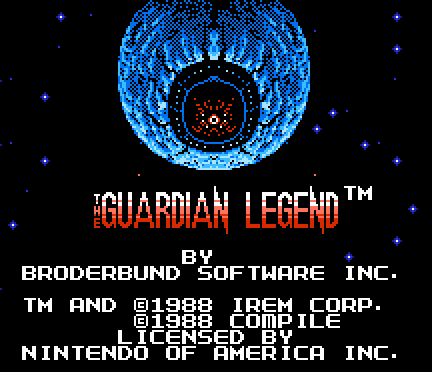 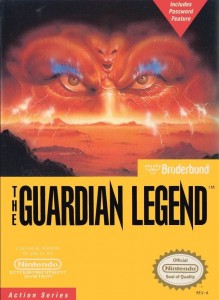 How can a box look both cool and goofy? 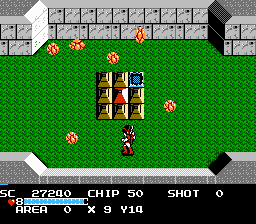 There ain’t nothing wrong with genre-splicing, especially when the result is an intriguing, inscrutable mess like Guardian Legend. I played this game without the use of any FAQ, so my review will certainly highlight any and all confusion. The game starts off as an insanely fast-paced vertical shooter. Enemies and general debris are flying at you quicker than your brain has time to register. Best-case scenario: hold down ‘A’ and hope you don’t get hit too much. This is yet another one-life-and-you’re-out game that have been gracing my presence lately. Once you take out the boss, you’re given some vague back story about failure and saving the galaxy and such, when suddenly, you’re a bikini-clad space warrior searching for… stuff! Yup, the game switches from a shooter to a third-person adventure game. This overhead view was deeply, heavily, massively inspired by The Legend of Zelda. In fact, I could hear Compile (the developer) pitching this to Broderbund (the publisher): “Think of Zelda, but… IN SPACE!” Surprisingly, it works. Right down from the enemies that flicker onto the screen every time you move on the map, to the pause menu also substituting as a map and inventory holder, the game is an excellent space representation of Zelda, with one exception: I had no clue what I was doing. There were several points where I entered a space portal or something that seemed like it was going to move me on to the next area, but it never did. Also, there were times when I’d blast special boxes and symbols of weaponry would be in them, like a boomerang. I never figured out what the point of these were. Despite the obtusity (huzzah for new verbage!) of Guardian Legend, I really enjoyed it. It’s a game that borrows from an obvious source, yet the end result is unique and well-crafted. ‘Tis a rarity for the NES era.
B
The following two tabs change content below.