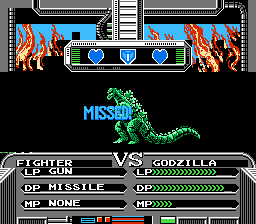 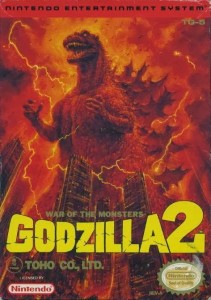 SPOILER ALERT! The game is awful, but this cover is amazing. Godzilla looks truly terrifying. 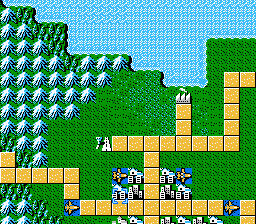 I’m all for precursors to Advance Wars, but not when my beloved Godzilla is involved.

Godzilla 2 sees developer Toho starting from scratch, which is, admittedly, not a bad idea. The original Godzilla should have been a bash-and-smash delight, but it suffered from irritable AI syndrome and all-around boring gameplay. In War of Monsters, bash-and-smash has been replaced by sit-and-think. Yes, friends, Godzilla 2 is a real-time-strategy game. What does that mean for you, the player? Well, instead of controlling Godzilla and his monster buds, you control… the army. Writing as a gamer and Godzilla fan, I’m already tapping out. I don’t play a Godzilla game to go against Godzilla. I want to control him, destroy other monsters and the human race, and be done with it! Bah.
Anyways, there are twelve scenarios to choose from on the main menu. It doesn’t matter which one you choose, as all of them involve shifting your fighter jets, tanks, and other weaponry closer to the monsters in order to fight against them. Often your goal is to “Stop Godzilla/Mothra/whoever from destroying this structure!” which is funny because the monsters never have any set pattern to their movement. They destroy whatever they want whenever they want, and if you don’t directly engage them, they won’t necessarily engage you; logical, I suppose, but still curious. Well, whatever. The point is, Toho destroyed yet another beloved genre, the RTS: firstly, by bringing in an iconic character that never belonged in said genre to begin with, and secondly, by making the back-and-forth gameplay neither strategic or interesting. Sadly, Toho continued their wave of Godzilla treachery further on the SNES, but (all praises due) I’m not covering that system, so if you’re curious – if you dare – check it out for yourself.
F
The following two tabs change content below.