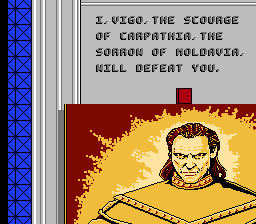 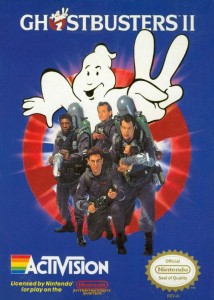 I think Dan Aykroyd makes his own vodka now. “Two shots and you won’t be afraid of no ghosts, or your stomach contents back!” 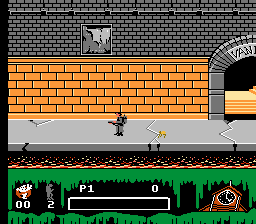 Remember when I said Ghostbusters would be better if it were a side-scrolling action game?…
I LIED!
Ghostbusters II may be worse than the first. What am I saying, “may”! It’s totally worse than the first game, bro! In the first game, there was the possibility for progression, if you drove long enough, set the traps in the right position, actually managed to wrangle the ghosts. Zael’s Tower was impossible, but hey, you could get there. Ghostbusters II shatters any thought of progression. How anyone would ever manage to get past the first level – or indeed, would even want to – is only if you shook hands and made a pact with Vigo the Carpathian himself. Truly his evil power is what you need to get past even the simplest and stupidest of circumstances i.e. the first level.
Grievances (only from the first level, mind you):
That’s three grievances over a level that I may or may not have even came close to beating. You know what that means? Potential for even more grievances. Who knows how long that sewer goes on. It is New York City, after all. According to GameFAQs, those kings of archaic gaming knowledge, there are driving levels in this game too. Because if anyone asked Activision what they wanted to see more of in the Ghostbusters sequel, it’s driving. Really, what more could you ask for? A competent “Ghostbusters” game? Congratulations, they released one a couple years ago. It’s about damn time.
F
The following two tabs change content below.