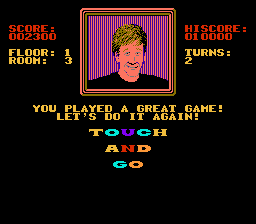 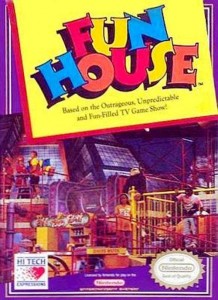 Fun House was released in January 1991. Four months later, the game show upon which it was based was cancelled. 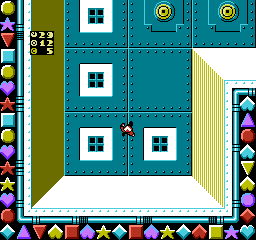 Sadly, this is not a candy factory, but an elaborate death trap for children of all ages.

And so, children, our time with the letter ‘F’ comes to an end with the inappropriately named Fun House. Fun House is apparently based off of a late ’80s kids game show that I never watched when I was a child, and I watched everything from about ’89 to ’95. My poor television watching habits aside, Fun House is an incredibly simplistic game, disguised as difficult due to its abominable control scheme. There are six levels per section of the “Fun House” and twelve sections to the actual “Fun House.” The goal to each level is to throw a red ball at some golden circular objects to make them explode. Sometimes they’re numbered, sometimes they’re not, but once you’ve destroyed them all, you get a key and the stage is over. The further into the “Fun House” you get, the crazier the obstacles become: arrow tiles, ice patches, blobular things that push you away from where you’re trying to go. Interestingly, none of this would be difficult, if your controls weren’t programmed by some elementary school dropout. The “D” pad is only used to turn you, while “A” actually moves you forward. Since the game employs a top-down view, I can understand the need for non-conventional controls, but for crying out Helen, I never got used to it. DO NOT TRY TO FIX SOMETHING THAT ISN’T BROKEN REALTIME. Thankfully, the game’s easy enough in its own right but that’s no reason for you to play this poor rendition of a game show that no one – not even someone who ingested insane amounts of TV – remembers or cares about.
F
The following two tabs change content below.