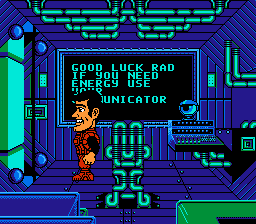 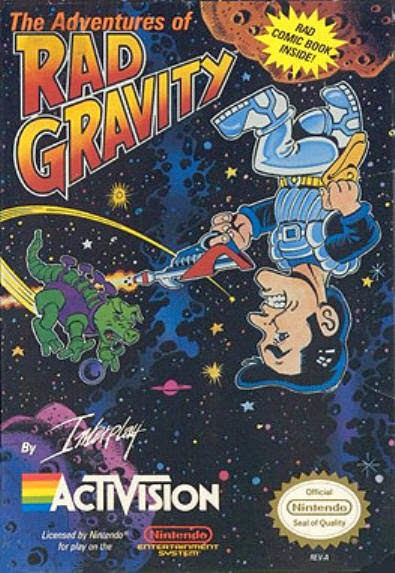 Rad Gravity resembles Bruce Campbell a bit, but don’t be fooled! You can’t wield a boomstick in the game. 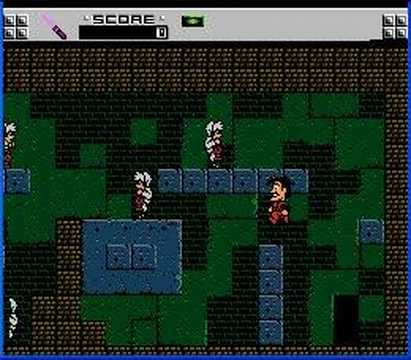 It kind of resembles dump here, but it gets better.

Playing anything with a name like Rad Gravity sounds as appealing as eating a box of fluorescent-colored erasers. You work hard, make minimum wage, go home to play a new video game, and Rad Gravity is the best Interplay could do?! But despite the name (swimming in retardo sauce) Rad Gravity kinda doesn’t suck. It’s the best you could hope for.

You begin your journey in space, and your goal is to retrieve… things in order to make the… other things work. To be honest, the story was pretty vague, and I can’t find a decent summary of the plot anywhere online (Wikipedia fail). It doesn’t matter. The point is to travel from planet to planet, collecting things like more life, better weapons, creamier hair gel, etc. As you go along, you run into crazy enemies, like Naked Robotic Fat Guy and Lady Mall Walker. The enemies aren’t very difficult to defeat, but it’s often hard to dodge their projectiles. Run past them if you can. The graphics start off bland-looking, but become more interesting as you progress through the game. Rad’s controls reminded me of how tight the original Mario’s controls were, which is definitely a compliment. The music sounds like butt cheese (I calls it like I hears it), but it’s easy to ignore. Most un-rad flaws: the enemies like to fly at you from across the screen where you can’t see them until you’re already hit. It’s also hard to get past some of the obstacles in later levels without taking significant damage. The story’s not the only thing that’s vague, either. Oftentimes, it’s trial and error figuring out which way to go. But who cares, right? If you’re playing this, you’ve exhausted other options. Thank God it’s playable.