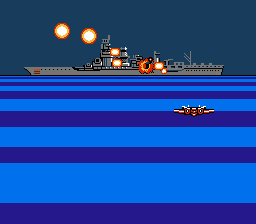 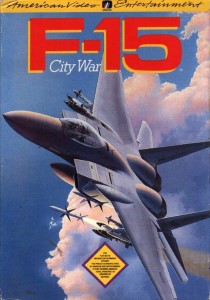 Nothing like soaring above the heavens to remind you that your task is to blow up an entire city. 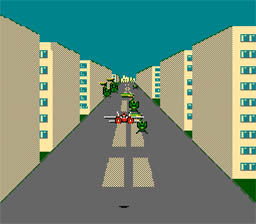 The poor office workers!!! (thanks to Consoleclassix.com for the jpg)

One, two, three, four, I declare a… F-15 City War??? That’s a little bit more drastic than thumbs v. thumbs, eh? Who would have the audacity to declare an F-15 City War? I’m not sure if there is an actual “legitimate” story to this game (i.e. a story that can be found in the manual which I do not own), as the game is quite the “hop in to your jet and start shooting” kind of affair. I’ll just make up a story if that’s alright? Alright? Alright? Very well. From what I can tell, you’re a rogue citizen who has stolen an F-15 and declared war on America. Because you’re a citizen run amok and the military is not currently ensconced in foreign war (in the game, mind you), they send their finest tanks, helicopters, and yes, naval battleships to stop you. You have five missions, each taking place in different parts of the city, but your objective is always the same: navigate around enemy fire and blow up as much of the military as you possibly can.
Were that story true, F-15 City War would have been surrounded by controversy, and like many controversial games, those who would have bought it expecting scandalousness would have been sorely disappointed. The game is a mixture of a 3-D shooter and a 2-D vertically-scrolling shooter, which sounds more interesting than it really is. The two viewpoints switch between levels, but the objectives in the levels are the same. 3-D levels are a touch harder, as you have to navigate around barriers and enemy fire and you’re never quite sure how close the obstacles are to your F-15. The 2-D levels are very much an “homage” to Capcom’s 19XX series, specifically 1942. The difference is in the execution. The 2-D levels are a lot slower than in 1942 – and the 3D levels, for that matter – with little to no challenge or need for precise movements. Helicopters come at you like they’re begging for bullets. At least in the 3-D levels, they maneuver out of the way. The controls are solid, at least. The F-15 has excellent maneuverability, your machine guns fire fast and true, and your bombs explode like, well, bombs. There’s just not much here to recommend. It’s a very average game inspired by much better games. While I’m thankful I’m not choking on another depressing wannabe flight simulator, I still wish this game would have lived up to its morally ambiguous title.
C
The following two tabs change content below.