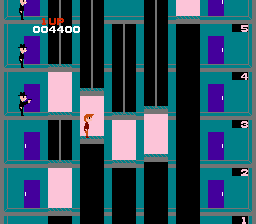 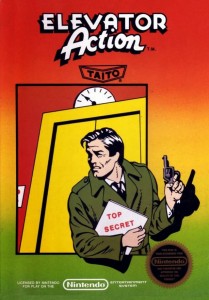 Columbo takes a break from his cigar to bring you these important documents for your NES! 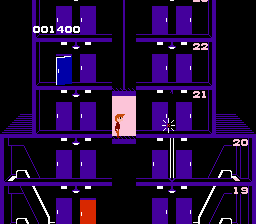 This is what happens when all the lights go out. Kanye doesn’t show up, thankfully.

Have you ever wanted to go from thirty-story building to thirty-story building, ascending and descending elevators, all while killing rows upon rows of government officials? I know I have, which is why Elevator Action is the game for me. While the game may sound abundantly thrilling – Elevators! Men in black! More elevators! – it is, or at least it feels, very much like an Atari port. Which isn’t bad! Your red-haired, red-shirted, red car-driving protagonist moves like he’s carrying twenty-five sacks of quarters in his twenty-five dollar pants. That doesn’t matter, though. As long as you can kill the men in black, ascend and descend on elevators and escalators with reckless abandon, and collect the documents in the brilliantly marked red rooms, you’ll be just fine. I can see how this game could get tiresome after awhile. Every level looks the same, save for a different color palette over the building’s interior. At this point in my playthrough, it has a Wrecking Crew-like appeal for me, albeit without the puzzle aspect that makes that game so darn underrated (Eggplant Men!). Elevator Action isn’t top-quality NES gaming, but it is the best elevator-oriented action game ever made, so I suppose one could say, you can’t front on that.
Nice touches: when you shoot out any of the dozens of lights, the whole building takes on a purple/black glow that’s almost haunting. I would shoot out lights just to do it. Also, squishing badguys between floors? That’s what’s up. Lastly, after you complete a level, you peel away in your red sports car like a boss, and the accompanying sound effect coupled with the protagonist’s uber-pixelly head in the car is comic gold.
B-

Let me show you how a real man rides elevators.