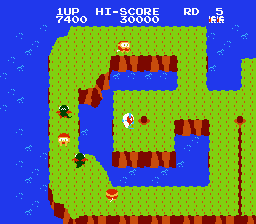 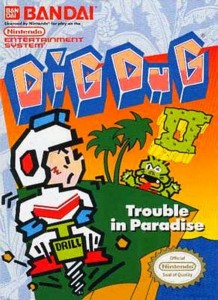 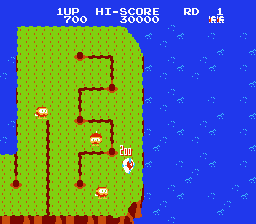 Pretty much every level looks like this, which means gameplay gets tedious after awhile.

Well, I’ll be hornswoggled: the original Dig Dug was never released on the NES in America, at least according to GameFAQS. For those who have never heard of the series, the original has you playing a devil-may-care exterminator who has to “dig” through layers of gritty sand to blow-up your enemies. Seriously, you attach a pump to them, fill them full of air and they explode like balloons. It’s fantastic and twisted, and like all arcade classics, the farther you go, the more enemies they throw at you and the faster you have to be with your mad pumpin’ skillz.

Dig Dug II shovels out the concept of digging underground, and throws you onto islands (hence the “Paradise”), which as you may know, are very much above ground. There are carefully placed holes around the island and you can drill into them to break off sections of the island and hopefully take some enemies down. The more enemies you kill via your island-decimating ways, the more points you get and the more accomplished you feel as an exterminator and probably as a man. However, if you want to preserve the islands for future generations, you can still bust out your trusty old pump and blow up your enemies, like your exterminator forefathers did. I dunno. The new island settings are interesting for awhile, but 72 levels worth is slight overkill. The strategy involved with avoiding enemies while trying to take off chunks of the island is interesting, but almost feels too involved for a game as simple as Dig Dug; especially when you still have the option to blow up your enemies, like in the first game. Not bad, but I’d recommend the original tried and true Dig Dug before this one.