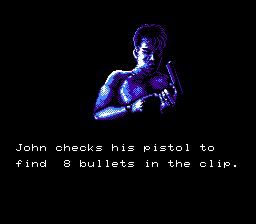 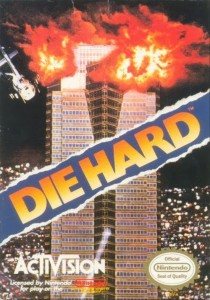 “Die Hard or Die Tryin'” is actually the title of 50 Cent’s latest masterwork. 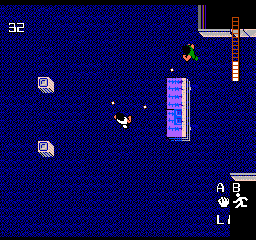 Thanks be to Vizzed.com for this screenshot. It’s not their fault the game resembles blue raspberry poo.

I’ve never seen the actual movie “Die Hard,” so I had little to no information going into this game. Something about bombs and buildings and terrorists, right? Sounds legit. You play as John McClane and your goal (I think) is to save a building from being destroyed because you’re played by Bruce Willis and you’re awesome and you think the building is pretty awesome too, which is why you want to save it. All 35 levels of the building are at your disposal to explore and get shot at by random polo shirt wearing bros. Many of said bros (“Bro, this is vintage Fitch, don’t get your blood on me!”) have keys that allow you access to places where you need to go, but in order to get the keys, you have to kill them. While the bros go down in one hit, they will spew out bullets like the remnants of last night’s kegger and you only have one life, so beware. Honestly, there didn’t seem to be much to the game. Collect a key here, get shot at there, get annoyed when bullets hit you because your stuff flies everywhere on the screen. Die Hard also sports some of the worst graphics I’ve seen in a while. Is John McClane supposed to look like a mangled Lego character? A lot of GameFAQS reviewers like this one because they probably grew up with both the game and the movie. I grew up with neither, but I’m sure the movie’s at least mildly entertaining.
D
The following two tabs change content below.