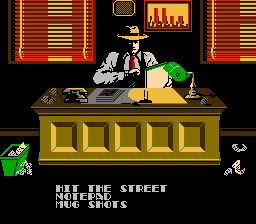 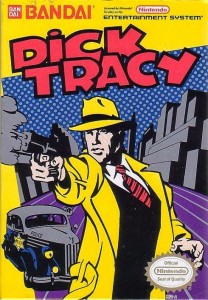 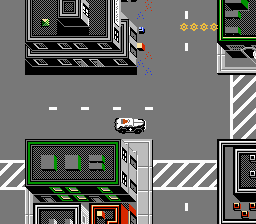 Dick Tracy’s got nothing on Philip Marlowe, but he’s a decent cop in his own right. He certainly has a more memorable cast of villains than Marlowe and a snazzier wardrobe to boot. Dick’s movie was an all-star production, filled with a great cast and terrific art production, while Marlowe’s works have had a harder time translating well to the screen (depending on who you ask). As for Dick’s self-titled game on the NES, well, it could be a lot worse, but it could also be a lot better depending on what you expect.
In the beginning of the game, you’re given one clue for your case and it’s up to you to go and find the rest. To do so, you get in your oversized paddywagon and venture out into the streets. The driving portion of the game can be frustrating, as the map is large, and it may take you a while to find the places you need to go. Also, snipers shoot at your car from the roof and it’s near impossible to hit them back. Once you enter a building, the game turns into a beat-em-up side-scroller. Clues are often highlighted by the word “Clue” and an arrow pointing directly to the clue, so no real amount of effort or puzzle solving goes into the game, which is a disappointment. You can also interrogate suspects along the way, and once you have all the clues you need, arrest them if it’s the right person. The latter portion is probably the most interesting and “detective” like portion of the game.
I admire that Bandai tried to make a full-fledged game with diverse gameplay. Unfortunately, the driving portions can be tedious, thanks to the snipers and lack of direction. The beat-em-up portions are standard and moderately entertaining, but I wish you would have had to search more carefully for clues. All in all, the game isn’t a complete loss, and Dick himself shouldn’t be too ashamed that it bears his name. A game featuring Marlowe would probably be a slower, more methodical romp filled with puzzles, less action, and more one-liners. Perhaps something more like Deja Vu? That’s what I wish Dick Tracy would have been.
C
The following two tabs change content below.