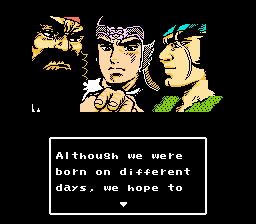 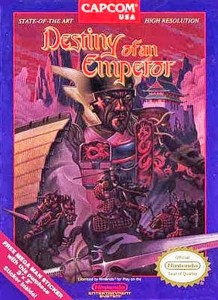 Believe it or not, the free Mega Man sticker is not the coolest thing about purchasing this game. 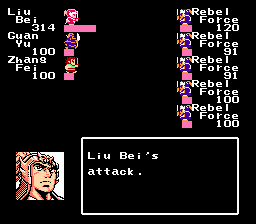 The battles are faster and better than Final Fantasy.

I felt like I was headed down the barrel of a Koei gun when I glanced at the name of this game. Destiny of an Emperor? More like Destined to Put Me to Sleep! Nothing beats being proved wrong, though, especially when it comes to some of the horrors I’ve had to face on this quest. Capcom, not Koei, is responsible for this unique and surprisingly entertaining mix of a traditional RPG with strategic elements. If I can throw down a “phat” hyperbolic beat for a moment, I think Destiny of an Emperor may be one of the most fun games I’ve yet to play on this quest. I don’t “come correct” with high praise very often, so you know I ain’t “frontin.”
All attempts at sounding like an early 90s gangsta aside, Destiny of an Emperor shines like a crazy diamond, no thanks to its remarkable gameplay. While the game is a traditional 8-bit RPG at its core, what with random battles, squatty sprites and the like, the gameplay is like nothing I’ve ever seen in any NES game. Your party initially consists of three Chinese generals, but as the game progresses, you can recruit other generals. All in all, there are 200 generals to collect, although you can only have 75 of them in your party altogether, and only six in your battling party. Still, this is long before the days of Suikoden or even Pokemon, so I was very impressed by this feature. In the first two towns you find three generals, so the “collecting” begins very early. Certain generals are, obviously, better at fighting, while others are better at Tactics. You should always have one general assigned to be your Tactician. As you level up, your Tactician will learn new tactics for the other generals to use when you battle. Once you enter a battle, one person fights at a time, as per normal, but there is an option called “All-Out” which is basically an all-out brawl. Unlike other RPGs which have useless “Auto Fight” features, “All-Out” is surprisingly useful and can be a quick way to gain experience. Another nice touch: each general’s Hit Points is actually the size of their army. To put it another way, when one of your generals – let’s say Lui Bei – takes 14 damage, the screen will say that 14 of Lui Bei’s men have been killed.
If I had to fault Destiny of an Emperor for anything, it would be how obtuse the direction of the game is at times. It’s hard to know whether a general you’ve recruited is a solid fighter or not until you’ve taken him out in some battles. This can be tedious, but I highly recommend it. Luckily, you can “fire” generals, so if one guy’s not pulling his weight, he’s left to fend for himself. Sometimes they’ll even come back to fight you, which is awesome! It’s also hard to know what items to buy for which general. You especially don’t want to buy items for a sucky general if you’re just going to kick them out later. These are niggling points that can easily be fixed with an FAQ, though, and besides, what NES RPG wasn’t obtuse at times?
So yeah, I really love this game. The story is essentially Koei-lite and nothing to write home about, but the gameplay will have you glued to your NES for hours at a time. It’s a shame Capcom has yet to continue the series because, despite the game’s age, it feels very undated and fresh. If you want a one-of-a-kind experience for your NES, you owe it to yourself to play this.
A+
The following two tabs change content below.