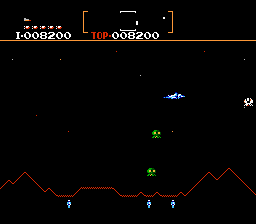 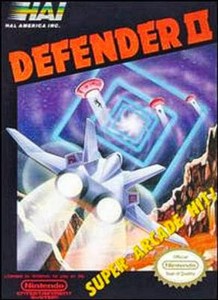 He thought he had defended for the last time… 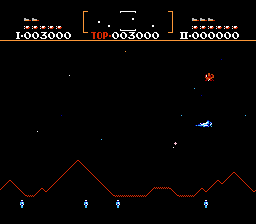 The airship is moving backwards! What shmup heresy is this!

I’ll come clean with all of you retro gaming lovers: before today, I had never played any version of Defender… ever. Truthfully, Defender was always one of those games that just missed my radar. I was born too late to have ever played it in the arcades or on the 2600, and I never played any sort of re-release that occurred on subsequent systems throughout the years (and there have been plenty). It was a bit of a surprise, then, to discover how much fun the concept behind Defender still is after thirty years. In Defender II, you have several pixelated people at the bottom of your screen, and your goal is to protect them and yourself from the alien invaders. The green circle ships are the worst when it comes to lugging your people away, but beware the purple and orange squiggles as they will shoot at you with reckless abandon. “A” is your shoot, and “B” is your bomb, or as I like to call it for this game, the Best Friend button. Once you destroy all of the enemies, you move on to the next level or “wave.” Since this is a classic game, there is no real “ending:” just wave after addictive wave of enemies to kill and people to save. Random note: I love how grand and empty space feels in classic games. It’s funny how a pure black background with some white or twinkling pixels can evoke such emotion. But I digress. Defender II is a true classic, worthy of all the retro hype.
PROTIP: don’t shoot your people as they’re being captured! It’s really easy to do, but the goal is to shoot the enemy carrying the person and then collect the person by flying over them.
B+
The following two tabs change content below.