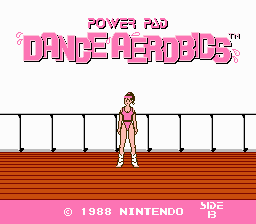 I’ve been saying it for years: skinny kids need to get into shape!

Would any woman really want to wear one of those?

Dust off a pink leotard and your Power Pad, ’cause it’s time for aerobics of the dancing variety! Choose from one of three modes – Dance Aerobics, Pad Antics, or Aerobic Studios – and get to steppin’. Dance Aerobics eases you into simple aerobic exercise routines with the Power Pad: move right onto button eight, left onto button four, raise your legs to ungodly heights, it’s all a rich tapestry. The instructor has a Power Pad herself and will show you all the moves you need to make on screen. Miss ten moves per class (the Power Pad is your aerobics partner and tattle tale all at once) and the game recommends that you “exercise more.” After you complete each aerobics class, you’ll be given a Pass Number (a password) and pushed forward to the next class: more routines, crazier movements, deeper burn. All told, there are eight Dance Aerobics classes to complete, and despite the feeling that you’re in your mother’s exercise class from the 80s, they’re an all-around solid workout.

Pad Antics has three options of its own: “Tune Up,” “Mat Melodies,” and “Ditto.” Tune Up allows you to make your own song on the Power Pad, as all but the two buttons in the middle of the Pad correspond to musical notes. Even if you’re a musical savant who’s composed on every instrument from bandolins to keytars, I’d wager you’ve never made a song on a Power Pad; Dance Aerobics and “Tune Up” dare you to dream. Mat Melodies presents a simple song (in my case “Twinkle Twinkle Little Star”) and has you play along on the Pad. Green dots on the on-screen Power Pad show you where to step, but I couldn’t bear to hear the Melodies the game wanted me to Mat, so I quit prematurely. “Ditto” is the best of the three anyway, a one-person version of Twister that shows you where to put both hands and feet on the Pad, and gives you points for doing so. Skip the musical nonsense and indulge in that.

Aerobic Studios is similar to Dance Aerobics, though taken in five, ten, fifteen, or twenty minute long chunks instead of eight increasingly difficult classes. Follow along on the Pad with the instructor’s movements to prevent your score from decreasing. Successfully complete a routine and your score will increase back to 100. Why you would care about a score if all you’re wanting to do is work out, I’m not sure. Dance Aerobics, God bless it, like society itself, feels the need to constantly judge and pick apart our failings. Considering Power Pads are pushing the quarter-century mark, perhaps the problem lies not with our inability to follow directions and more with the musty sensors not doing their job properly. But that could just be my wide bottom talking.