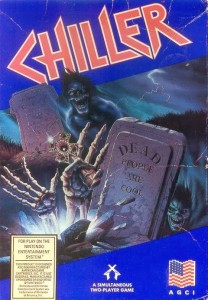 Dead people are just the coolest. 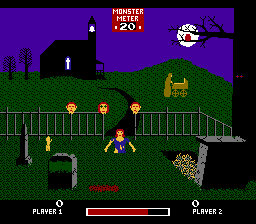 The Zapper is the first peripheral in a long, proud tradition of Nintendo releasing peripherals they would never support, regardless of how cool they are (Game Boy Camera/Printer, anyone?). Granted, there’s not much one can do with the Zapper beyond shoot. How many times can one shoot a duck or person or plate? Before I played Chiller today, Hogan’s Alley, Duck Hunt, and Barker Bill’s Trick Shooting were the only three games I could think of off hand that support the Zapper, though there are probably more I’m not aware of. Chiller is different from the former three, however, in that it is both a Zapper game and an unlicensed game. On top of that, it is a port of an arcade game that featured copious amounts of blood, which was a Nintendo no-no back during the regime of the NES. The latter points makes it a unique blotch in the canon of NES games, but it is only a blotch and a nasty, smeared one at that.

The premise of Chiller is interesting for a Zapper game, at least. Instead of shooting ducks or Hogans or plates thrown by women dressed in bunny costumes, you’re shooting zombies! and bats! and severed heads! and… women out for a stroll with their baby? Hmm, well yeah, you do get points for shooting a woman with a baby carriage in the first level (several times), but my guess is she was carrying Rosemary’s Baby or Damien or some other evil child of the corn. The goal is to shoot twenty monsters in each level, which is signified by a “Monster Meter” at the top of the screen. Many of the monsters reappear several times, which you would think would make the game easier. Unfortunately, the time limit in each stage is furiously quick. Only after a few separate tries was I able to make it past the first level, but by the third level – a disturbing pixelated torture chamber – monsters were hardly anywhere to be found. I kept shooting bats and bugs that kept reappearing, but my time and patience eventually ran out with both the level and Chiller itself.

If it weren’t for the Zapper, this game wouldn’t have been ported to the NES and we would have all been spared the promise of a potentially fun shooter. The fact about the Zapper is amusing because, from the reviews I’ve read around the interwebz, it barely works with this game. Apparently it’s much easier to use the NES pad (or in my case, a Wii Classic Controller) to guide the cursor and shoot the enemies. And by “much easier,” other reviewers must mean that it’s less of a pain in the butt. The D-pad was not meant to guide a cursor around a choppy screen. It doesn’t help that the game’s reaction time is slow: once your fire a shot, don’t expect to fire one again for another second or two, which wouldn’t be bad if not for the turbo time meter reminding you you need to shoot faster. The graphics are of poor Commodore 64 quality, meaning that it’s often hard to know what to shoot. In the catacomb level, the monsters looked like misshapen fruit snacks. The only way I knew they were monsters is that the numbers on my monster meter went down when I shot them. Music is the same six muted notes repeated over and over again. There really is nothing to recommend here.

This game could have been awesome. Who doesn’t like shooting scary monsters? It fulfills the dreams of scared children and former children ’round the world by giving them the chance to shoot the very things that make them afraid. Sega captialized on it with great success in their House of the Dead series, and apparently, the arcade version of Chiller was a fun predecessor to the House of the Dead. Alas, the NES version of Chiller looks like it was constructed by disturbed four-year-olds with a vague knowledge of game development. It’s playable, but barely, and it’s strange and unsettling for all the wrong reasons.