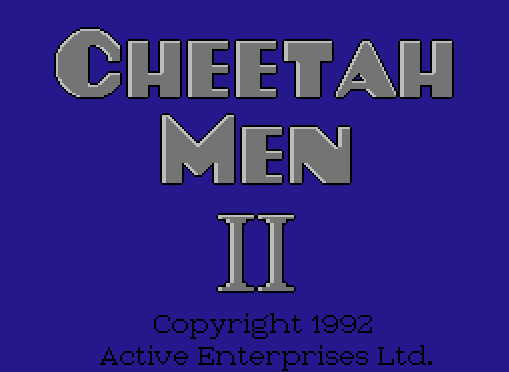 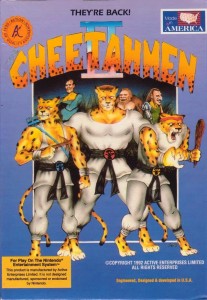 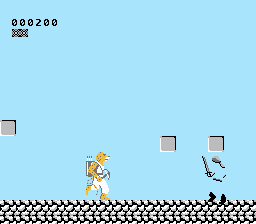 And this is only the first level!

I know, I know, I haven’t even reviewed Action 52 yet. For those not in the know, Action 52 is a so-called multicart for the NES. It was unlicensed, of course, and it also happened to be terrible. Many of the fifty-two games featured were either of the shooting or action genre. Many of them played very similarly and were filled with bugs, glitches, and all-around crappiness. Basically, they weren’t fun to play, thus leading many gamers to decry the game back to the pit. It didn’t help that the cartridge was priced at $199, or as the box says, “less than $4 a game!” You get what you pay for, friends. I pity the poor souls who paid the price of a brand new Super Nintendo for Action 52 in 1991. One of the many games featured in Action 52 was the original Cheetahmen. Active Entertainment, the developers behind Action 52, assumed that Cheetahmen was going to take America by storm, so they quickly whipped up a sequel, Cheetahmen II. Thanks to poor sales and scathing reviews of Action 52, Cheetahmen II remained lost until 1997 when 1500 copies of the game were released into the secondary market. Copies of Cheetahmen II routinely sell for upwards of five hundred dollars, despite the game’s poor quality. NES collectors are a devoted lot, to be sure. Long, tedious explanation aside, it’s true, I haven’t reviewed Action 52 yet – it was somewhere in the ‘B’s before I decided I was going to review unlicensed games – but I will get back to it.

Cheetahmen II is an unfinished disgrace of a side-scroller. Despite its never having been released, I’m pretty sure that, even if it was finished, bugged, and tested first, it would still be a horrible game. At its best, all you’re doing is running across the screen, avoiding some enemies and killing others. At its worst, all you’re doing is running across the screen, avoiding enemies and killing others. Sound like every other side-scroller? Incorrect. The cheetah character model is huge and lumbering. You can’t duck to avoid flying enemies, nor can you kill enemies that crawl on the ground. The result is a lot of jumping away from enemies, but even then, your pinky toe might touch one of them and you’ll lose a hit point. At one point in the first level, you have to jump from a higher plain to a lower plain, and every time, a bug will come out of nowhere and damage you. There’s no way to get around it. Whole parts of the level will repeat themselves again and again ad nauseum. In fact, I’m not sure there’s an end to the first level because sections of the level just kept going. I’ve been told there are four levels, and that once you beat the boss of the fourth level, the game won’t let you continue. It’s almost as if the developers came to their senses and said, “You know what? We suck. Let’s not harm people any longer with our half-developed tripe.” Also, jump is assigned to the “B” button. I’m sure there’s more to complain about, but that’ll do for now.

Despite my massive disgust for Cheetahmen II, I knew what I was getting into. Cheetahmen II and Action 52 are two of the most notoriously bad games for the NES, outside of LJN and THQ productions (the latter two companies are arguably worse since Nintendo slapped their meaningless seals-of-quality onto their licensed dreck). At some point, I had to stop fuming and start appreciating Cheetahmen II‘s ridiculousness. The opening cutscene, which could possibly be the worst piece of animation I’ve ever seen, is pure comic gold. The way the Cheetahman is animated as he’s jumping into the air – squatting with one leg up and one leg kneeling – is also priceless. The generic animal enemies are non-threatening; cute, really. I love that the majority of the gray blocks that levitate in the air are too high for you to jump on. Lastly, I love the way the quiver looks on the cheetahman’s back. Yes, the Cheetahmen, supposedly fierce warriors by the game’s standard, fight bug, snakes, dogs, and birds with a bow and arrow. If I were a member of the proud Cheetahmen race, I’d be appalled.

A final disclaimer: do not play this game thinking it’s one of the worst on the NES because it isn’t. I can think of several other games – Adventures of Rocky and Bullwinkle, for starters – that could possibly claim that crown. What Cheetahmen II is the video game equivalent of an Ed Wood film. It’s a laborious game to actually play, but it’s also strangely endearing and a fascinating document of Nintendo production. Because a good number of NES developers made a mint making NES games, any no-name development company could and often did try and stake their claim in a piece of the Nintendo money pie. Active Entertainment tried harder than most to make gobs of money with their ridiculously priced Action 52, but that failed to catch on with consumers, leaving their second game Cheetahmen II as a forever unfinished piece-of-WTF in NES history. It might not be the worst, but Cheetahmen II could very well be the best “worst NES game.”